Sometimes as writers we just have to slip into our little writing cave and for me it means housework doesn't get done...or at least very well and clothing and makeup becomes a secondary concern. Yeah, it's bad. When those days arrive, I can be found in my jammies with nary a drop of makeup. That's pretty much the way it is for me. I'm trying to get a story finished by the end of February and carving out time is just a MUST at the moment but I'm managing.

This weekend my daughter is in from college though and for me that means FAMILY FIRST. Naturally, by necessity I'll be dividing my time and dealing with the 'guilts'. Umm...bet you understand the concept. If I spend too much time with her, doing nothing and lazing around, I'll feel guilty that I'm not getting at least SOMETHING down on the story. If I work on the story, I'll feel guilty for not spending time with her.

Do you ever get the feeling you just can't win? The way I see it, she will be leaving on Sunday so I'll be back to the cave 24/7 and I plan to have some fun with her because I'm not sure when she'll be coming back. Probably not for another few weeks to a month.

So here's the plan.

She is a girl who likes a little 'down time'. She'll want to play some computer games or read a book so I'll write while she plays. Actually I'll be playing too, the way I figure it. When she wants 'mom time', hey, I'm there! I think it'll work out with a minimum of guilt and hopefully I'll just inch that much closer to writing THE END on my manuscript. Think it'll work? I kind of do. In the end, I'll hopefully avoid 'the guilts' and can do BOTH fun things.

Now that it's the weekend and time for a little hot, steamy reading, you might want to head over to Ellora's Cave for these two smokin' hot offerings. 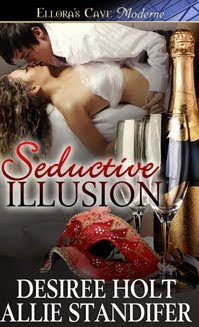 As the relationship builds and the sex grows hotter, she finds herself pushing away memories of Chase. But on the third night of the cruise, the night of Valentine’s Day, Evan has a major surprise for Sonia—and her life is about to turn upside down. 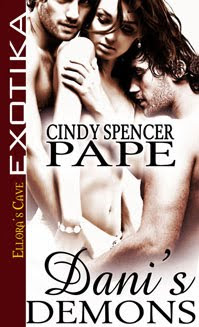 
Bored with her life in Chicago, vampire Dani DuBois heads to Las Vegas for a little fun. Then she meets demons Kaz Elgin and Ty Cole, and things start to get really interesting. Torn between the attraction she feels for each of them, Dani at first has no idea that the two men know each other. When she runs across the two of them having an argument, she can’t believe they’re both being such men, but they’re both so incredibly hot. After they take care of their rogue demon problem, they decide to take care of Dani—together. Through a dungeon sex club and bondage games in a private room, they set out to discover just how much fun three immortals can have in Sin City.


Note: While part of a series, this book can be read as a stand-alone.
Magically appeared by Regina Carlysle at 10:05 AM

I feel guilty a lot. I'm either writing too much and not paying enough attention to my family or I'm not writing enough and falling behind. I need to find that happy medium.

I need that happy medium too! It's so hard lately with the kids having so many snow days! Usually, I can write while they're in school, then have family time after. That's not been the case lately though and my youngest hates it. She wants mom away from the computer!