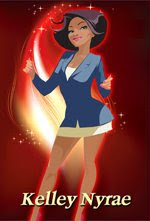 Today I'm going to share the first EVER excerpt of my novella The Art of Love which releases March 2009. I'm neverous because this book is a little different for me. I hope you like it.

Blurb:
Monique Brenner has had her eye on the beautiful Maori art of Tane Koti for years. When her art gallery finally gains a little bit of clout in the Seattle art scene she contacts him with her interest in buying some of his pieces. What she doesn't expect is the overwhelming attraction she feels toward the mysteriously, sexy man behind the art. Her gallery means everything to her which means she has to be professional. Unfortunately that means no hanky panky. But when Tane asks her to accompany him to a local art show Monique throws caution to the wind. A woman can only be so strong and the allure of Tane Koti is too strong to ignore.

UNEDITED EXCERPT:
After her impromptu shower adventure Tane had washed her body and her hair before turning off the water for them to get out. She’d warned him her hair would be an even bigger mass of unruly curls but he didn’t seem to care. He told her she was beautiful no matter what and the painting would take more than one sitting so he’d be sure not to get to her hair tonight if it bothered her.

She slipped on a robe he gave her. Tane wore a pair of boxer briefs and nothing else. Monique tried not to let herself get distracted by his hard body and the bulge beneath his underwear because for some reason this seemed to be important to him. It was important to her too, more so than she wanted to admit. “Where are we doing this?” she asked trying to disguise the quiver in her voice.

He didn’t elaborate any further but pulled his green blanket and pillows from the bed and grabbed a matching red, velvet cover and red plush pillows from his closet. He was a man on a mission, organizing the pillows multiple times until he got them just right. His concentration so intense she wondered if he even realized she was still in the room.

He answered her internal question when he said, “Take off the robe and lay on the bed, Monique.”

Show time. She inhaled and exhaled a couple deep breaths. He’d seen her naked before, made love to her, and showered with her but this felt much more intimate. Like he would be seeing her for the very first time. When she stalled a minute longer, gaining her courage he finally turned and walked toward her, understanding in his eyes. Tane cupped her cheek and kissed her. First slowly, then more deep, more intense.

“Why are you so nervous about this, baby?”

He used the endearment for the first time today. First it had startled her and now she just reveled in the word rolling off his tongue. It warmed her from the inside out. She stood there a minute wondering how honest to be with him. Somehow she knew he would know if she wasn’t. “I’m afraid of what you’ll see. Afraid you’ll see too much. That I’ll see too much.”

He didn’t kiss her again. Just gazed into her eyes, his thumb caressing her cheek. “You never have to be afraid with me, Monique.”

She nodded her head yes and Tane led her by the hand to his bed. He pushed the robe from her shoulders, picked her up and laid her down in the middle of the bed. The cool fabric of the cover did nothing to chill the heat in her skin. He posed her so she lay on her side, curled her bottom leg and let the lay out straight. He had that intense stare back, a man at work and in his element. She felt honored to see him like this.

Obviously not satisfied he pushed her upper body back a little bit so she half lay on her back, her waist curved but comfortable, her breasts in plain view.. He positioned one arm over her head the other lay down at her side. She smiled when he stepped backwards and looked at her admiring his handiwork.

“Beautiful.” Tane turned and walked to the easel he’d set up earlier. She hoped the drumming of her heart didn’t burst through her chest.

Tane never felt like such an amateur in his life. His hand shook lightly which wouldn’t work. He needed to get himself and his need for Monique under control. No matter how many people he’d painted in his life this was different. First, he’d never painted from a naked model. Second, he’d never painted a woman he loved. Looking at her right now, if he’d had any doubts before, they faded as he took in the beautiful sight of her naked body laying there for him to capture.

And he would capture her. Every inch of beauty inside and out. He wanted her to see herself through his eyes and this was the only way he knew how to show her. Just a short few minutes ago he asked her why she was so nervous and now he’s the one who sat here unable to make his hand do what he wanted it to do. Instead he took her in with his eyes, drinking the sight of her lying on his bed, positioned the way he wanted her, sharing her bare body for his eyes only.

“Is everything okay?” she spoke so lightly he could hardly hear her. His cock started to stir in his boxer-briefs.

“Yeah, baby. Everything is perfect.”

Tane picked up his brush and dipped it into the paint. Right before he touched the canvas Monique stopped him by saying, “Wait.”

He looked over at her, confusion showing on her face. “What is it?”

“Have you…I know I don’t have the right to ask this but have you done this before…I mean with someone your…sleeping with?”

Her endearing stutter made him smile. “No baby. Just you.”

“What about the blankets, the pillows and all that?”

“All bought with your beautiful, luscious body in mind, Monique. Now relax so I can get started.”

Tane stroked the brush across the canvas intent on creating his best masterpiece yet.
Magically appeared by Kelley Nyrae at 11:20 AM

Hey Kelley, girl this is some hot stuff,I can't believe your nervous about it,I for one can't wait to read it.
thanks Cindy

Thanks Cindy. The tone in this book is different from my usual stuff. Its always scary to try something a little different, ya know? I'm a scaredy cat. I can't help it. LOL. I'm so glad you liked it!

This is a very sensual scene. It's so descriptive that it holds the reader's attention.

Thanks Anne. I think the whole book kind of has that sensual feel. That's what I tried for at least.

It's beyond sensual imho. That's one of the most intimate, stimulating scenes I've ever read that did not contain intercourse.

Bravo Kelley. This was captivating!

Wow, Des! You have me smiling ear to ear over here. That's one of the best compliments I've ever recieved. Thank you so much!!! I'm honored you liked it so much.

Hey Kelley! Loved the excerpt. I was completely drawn to the story and can't wait to see what happens with Tane and Monique. Don't worry girl this one is a winner!!

It's always scary trying something new.

Rolanda, hey girl! Thanks for stopping by. Thanks for the compliments. I'm so glad you enjoyed the excerpt.

Anny, Thanks! Yes it is scary. My stuff is usually kind of funny and light.

Hey, Kell!! It's Sunday and I'm just now reading this but as you know, I've been out of town. BUT I had to comment on the scene. Beautiful! Very sensual and evocative. Can't wait to read the rest.

Thanks Regina. Hope you had fun while out of town.

What a sensual excerpt Kelley. I'm glad that I got the chance to read it.

Thanks a ton, Megan!