Saddle Up for a Ride with a Cowboy 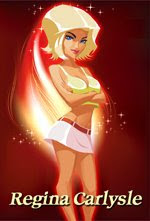 Wanna man with a slow hand? Wanna lover with an easy touch? Snicker. Sorry, had to steal the lines from a song here because this one always makes me think about cowboys. Maybe it's because I'm from Texas and they're swarming around here, but I write a lot of cowboy stories. No, not the Rancher's Secret Baby kind, but the ultra hot, slow moving, long lovin' kind that make the ladies say...um, hey, cowboy, let's go for a RIDE. So do you like cowboys and cowboy stories? What is it about a cowboy that makes him so appealing?

For many readers, the cowboy story will always be in fashion but I've been noticing a resurgence in these stories lately. They seem to be hitting the bestsellers lists with a number of publishers in big numbers. Maybe women like the idea of a plain talking man or maybe it's the way he wears that battered cowboy hat low over his forehead?

I've written several of these and I always love writing about them. Cowboys are rugged, down to earth men, who know how to treat a lady. One Dependable Man, Book One of The McBrides of Texas (first of a three-book series) is available in e-book and print at The Wild Rose Press under my OTHER name, Rita Thedford, and back last fall this publisher came up with a unique idea for a continuing storyline that was just too good to pass up. Wayback, Texas is the place where a cowboy falls in love every 8 seconds and I was priviledged to write the first book in the series. The authors have built the fictional town from the ground up filling it with colorful characters. Wayback is a small texas town whose only claim to fame is a rodeo that's held from March through October every year and when the visiting cowboys and cowgirls mix with the locals, the prairie dust flies. My story Hot Night at the Blue Bug Saloon told the story of Nash Logan, a cowboy with a lonely past, and Gina Ballew, a whole lotta woman. Several stories have since been released in the series and they are all just soooo good. Later this fall, The Wild Rose Press will release four stories in a print anthology called Wild Wayback Nights. My story will appear in this along with those by Cindy Spencer Pape, Judith Rochelle, and Sylvie Kaye.

The latest installment to the Wayback Texas series is by my friend Cindy Spencer Pape. Cindy writes for The Wild Rose Press, Total E Bound, and Ellora's Cave and everything she does is just yummy. So here's a little bit about her rockin' Wayback Story, All the Way Back. 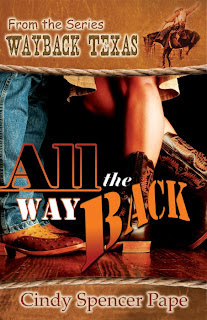 All the Way Back
By Cindy Spencer Pape
A Wayback, Texas story
From The Wild Rose Press
Buy It Here

Blurb: Drew Lawson left Wayback for the army a long time ago. Now he’s back, a little older and a lot wiser, but the past still haunts him. Music teacher Annie Zykov had a crush on Drew when she was a kid, but what she feels for the man is something else entirely. With Annie’s help, can Drew come to grips with his past and learn to face the future? Is love what it takes to bring him All the Way Back?

Excerpt: (R-rated)
His movements were sure and graceful, in perfect time with the music. She closed her eyes and began to quietly hum along to the music.

“Why didn’t I ever know you could sing?” he asked. “You must be pretty good at it to teach it for a living.”

She shrugged against his chest. “I do okay—I’m no Gretchen Wilson, but I don’t usually send people screaming, either. I didn’t really start taking it seriously, though, until high school. When I was younger, it was just something I did at Sunday school, or singing along with the radio. I sure wouldn’t have tried to sing in front of my brother or his cute friends—I was trying to hang out with you guys—not be laughed at.”

“Were we that mean to you, Little Bit?” he asked with a warm chuckle that made his chest vibrate against her cheek. “Kids can be rotten to each other, but I’d hate to think we hurt you.”

“Nah. You didn’t have a mean bone in your body, Drew. I don’t believe you have it in you to deliberately hurt anyone.”

He stopped moving. His whole body stiffened, as if she’d just belted him with a cast iron pan. His hands tightened convulsively, then he inhaled a deep breath and slowly relaxed his muscles. “You’d be surprised, darlin’, what a man like me is capable of.”

Shit. He’d just come home from a freaking war zone. Of course he’d been required to hurt people. She’d said something wrong—way wrong—but she had no idea what to do about it. She just rubbed her cheek against his chest again and went back to humming along with the music. They didn’t speak again, but when the song ended and another one, Patsy Cline this time, started up, they just kept dancing.

Annie was glad he was holding her up, because being pressed this close against Drew’s chest was making her knees weak. His breath was warm against her ear. All that coiled muscle right under her fingertips made her want to find out what he felt like without any clothing between them. She was glad she’d worn a denim skirt instead of jeans so the wetness between her legs didn’t show. Bad enough that her snug T-shirt would probably show off her hardened nipples as soon as she moved away from Drew’s chest.

Stoic as he seemed, Drew wasn’t unaffected either. Annie could feel the firm press of his erection against her stomach as they danced. It had grown noticeably since they’d started, and that made her even hotter. What was it about this man that made her want to jump him when, really, they’d only just met—as adults at least? Was it her childhood crush coming back to haunt her? Her grandmother’s second sight? Or just the chemical reaction between two physically compatible adults? Annie wasn’t sure, but she was very much inclined to find out.
Magically appeared by Regina Carlysle at 9:23 AM

Cowboys are hot. This sounds great!

Well, I can tell you it IS. I've already read the story and of course, everything Cindy does is just great! I'm a huge fan of her work.

Thanks Reg! Yeah, there's just something about a cowboy!

I love the entire Wayback series... not to mention those other cowboy stories by Rita and Cindy. Yeahhhh.

Hey Regina,I'm not sure I can tell you exactly what it is about cowboys,but I love everything about them,from there slow drawing voice to there cowboy boots,& I just love cowboy books. I bought your book Hot Night at the Blue Bug Saloon & I am so looking forward to reading it.
Cindy

Lordy, lordy, Cindy. I know just what you mean. I write them because it just comes easily to me having lived around them all my life. Hope you like Blue Bug. It's a pretty hot read, I think and everyone, so far, loooooves NASH and wants to bring him home to mama. LOL

You girls are too much! But you sure know your cowboys and where to find them. Wayback's corrals are filled with them. All a girls has to do is saddle up and choose a ride. Great book, Cindy. And fun article, Rita.

Oh, thanks for posting about this today, Regina--I can't wait to read Cindy's story! I think cowboys have a lot to recommend them--the best of them are self-sufficient, reliable, smart, in great shape, and as you'd mentioned, good with their hands :) What's not to like? ;)

This looks like a great story! Thanks for the heads up on it, I love cowboys!

Well, of course I love cowboys--have read all of the Wayback series, of course, and can't wait now to read Cindy's! Very hot excerpt!

I just checked my TBB list. Tempting Tess is #37, and Cindy's Cowboy books start at #43. So in a couple more months...Cindy, Stone and Earth is also approaching! I know...I'm behind...but slowly catching up!

WOOHOO. Yes, ma'am...we have some cowboy lovers here today! There is a core of down to earth decency in a cowboy that I think is very appealing. Who doesn't admire a man who is a "straight shooter". LOL. Oh. My. Being baaad here. snort.

Snicker. OMG, MOLLY!!! At the rate you're going you won't catch up for a couple of YEARS and by then, lots more stuff will be out there that you just HAVE TO READ.

Loved the excerpt! He sounds like a man with problems. Just the kind of hero I like to read about. And he's a cowboy to boot! It just doesn't get any better than
that :-)
I love the Wayback series and am privleged to be amongst such talented writers!

Naw...at 3 per week...I'll be reading these by October:) Of course, if I win any contests, or decide the others in front just don't interest me anymore...Look at it this way: You'll be getting a royalty check just in time for Christmas:)

Cindy, can't wait to read this one. Wayback stories are always at the tip top of my to-buy list! Beautiful cover, too. Regina/Rita, you set the bar really really high for the rest of us with Hot Night at the Blue Bug Saloon. I'm definitely picking up the new anthology as soon as it's available. Great post!

Congratulations, Cindy. Sounds like an awsome story. :-) I'm so pleased to be a part of such a wonderful and exciting series.

HI Sylvie! Your new Wayback Story The Wrong Side of Love is at number 3 on the wild rose press bestseller list. WAY TO GO!!!! Glad you'll be in the anthology with us. Might fine company, ma'am.

YAY MOLLY!!! A nice royalty just in time for Christmas!!! I love to hear that...snicker.

I love it! Great excerpt. I'm definitely going to go bankrupt buying all these books. Now, to find the time to read all about these delicious cowboys!