Trapped in the Storm

Hey everyone! Happy weekend. I'm sharing the blurb and excerpt from my new release, a short story from Red Rose Publishing called Trapped in the Storm. Hope you enjoy! 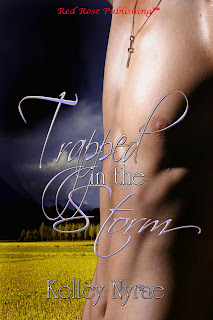 Blurb:
Look at what the storm blew in!

Is Stephanie in for the fight of her life as she tries to keep her emotions under control or will the heavy winds of the passion blow her away?

Stephanie Bridges can’t seem to get her ex-boyfriend out of her head. Or more importantly her heart.

She figures the best way to cope is to avoid the cocky, ladies man as much as possible. Unfortunately that’s easier said than done considering she’s the town carpenter and he owns the only hardware store around for miles.

When a monster storm blows into town leaving Stephanie and Luc trapped in Luc’s Hardware they’ll have the chance to recapture the magic she’d always felt they made together. That is, if they can stop fighting long enough to succumb to the desire still between them.

Excerpt:
“I’m starved. You have anything to eat in this place?”
“I have a sandwich, chips, and cookies in my cooler. I didn’t have time to eat lunch earlier today.”
“Well break it out, Carr. We can split it if you don’t mind.”
“You’ll owe me,” he said with his wicked grin.
“I’ve got a couple bucks in my pocket. How will that do?”
Stephanie reached in her pocket pretending to grab money for Luc. She knew he didn’t want it, but she tried to beat him at his own game.
“Get you hand out of your pocket, Stephy. You know I don’t want your money.”
She smiled as they headed to the lawn and garden section. They shared a ham and cheese sandwich at a patio table, under a large sky-blue umbrella.
“Isn’t this like the one you wanted to buy for your house?” Luc asked between bites.
“Actually I did buy it,” she responded. “I went over to Hillside and bought one.”
A look of confusion washed over Luc’s face. “Why’d you drive forty miles each way to pick up a table when you could have driven five minutes and bought the same one from me?”
Men really were dense. “It happened right after we broke up, Luc. I was afraid it might be too hard on you to see me that soon,” Stephanie rushed the words from her mouth before taking her last bite of sandwich. In reality she was the one who couldn’t handle seeing him when she was so raw from the recent break-up. Pride pushed the lie from her mouth.
“I see,” the right side of Luc’s mouth rose in a half smile that made her want to jump his bones right there.
“You remember that job we did together over in Hillside?” he asked, eyes gazing into hers.
“Yeah, I remember,” she said with a small laugh. “You wouldn’t listen to me about the measurements being off. We got about half way done before we had to start over because I was right.” Stephanie smiled and exhaled a deep breath. “You always were too stubborn for your own good.”
Luc let out a loud, bellowing laugh. She felt his breath brush across her skin, leaving warmth in its wake.
“Now that’s the pot calling the kettle black, don’t ya think, Stephy?”
“I am not stubborn, Lucas Carr!” She knew she didn’t sound convincing. Hell, she knew she was stubborn as a mule.
“Of course you aren’t. I don’t know where that thought came from.”
God how she missed this, talking work, and laughing with him, joking and giving him a hard time. They could talk for hours, arguing half the time, but now that she thought about it, they had been meaningless arguments. They were a part of them, and what made their relationship, well, fun. Funny she should think of it now.
“We had some good times, didn’t we?” Luc’s green eyes sparked with sincerity.
“Yeah, I guess we did.”
They were each silent for the next few minutes. The only sound, the howling wind and loud banging drum of rain on the rooftop. Stephanie briefly wondered what other damage the storm had done besides what was done to her truck. There would no doubt be fallen trees and flooding on some of the properties by the river.
She tried with no avail to keep her mind off Luc and his intense stare. A moment later it became damn near impossible as she felt the warmth of Luc’s leg brush up against her own.
“We were good together, Stephy. I miss touching you.” Luc reached out and brushed his calloused fingers across her cheek.
She felt the familiar throb between her legs that always accompanied Luc’s body touching hers. Her nipples puckered and it became obvious there was no way around this. She wanted Luc and he wanted her; at least for today he did.
She let her mind grasp the concept of what he had just said to her. He didn’t miss her; he missed touching her. She knew they were good together sexually so it didn’t surprise her that Luc would bring it up now. Her heart wanted them to be good together in every way, but now, at this moment, sexually was better than nothing.
Her strength waned as she realized she could deny him no longer. She closed her eyes in a silent confirmation to herself, and to Luc.
“I miss touching you too, Luc. I miss being touched by you.” She opened her eyes in time to see desire brewing inside his darkening eyes and he offered his best bad boy smile. She came undone. “Touch me now, Luc.”

Available Here
Magically appeared by Kelley Nyrae at 1:00 AM

You are an awesome writer....and moving on up girl!!

I love this excerpt. Luc is another of your heroes that I just know I'm gonna love! :)