Do you Kindle? I've heard really neat things about them. I don't have one but I'd love to in the future. Why do I want to know you ask???? Because the first book in the Friday's at Luciano's series, Getting Lucky with Luciano is now available on Kindle!!! 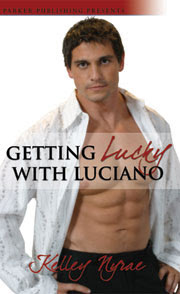 Responsible, workaholic bookstore owner, Kaylee Daniels is ready to add a little bit of spice to her life. She doesn’t have a lot of spare time but what better way to try and occupy her free time than with a no strings attached affair with hunky Italian restaurant owner, Luciano Valenti. The man has had her fires burning for the past six months. The only problem: she can’t be around him without turning into a stammering klutz. How is she supposed to seduce a man she can’t even hold a conversation with?

Since the first Friday Kaylee Daniels walked into his restaurant she’s had Luciano on edge. The foxy woman spilled more drinks than anyone he’d ever seen but something about her got to him, bad. Luciano doesn’t have time in his life for anything serious. Hell, he doesn’t want anything serious and Kaylee is definitely a relationship kind of girl. Or so he thought… What happens when two career minded people decide to spend a little more time on themselves…and each other? They just might find themselves getting lucky along the way.

Reviews:5 Ribbons from Romance Junkies
GETTING LUCKY WITH LUCIANO is a delicious tale from the first word to the last. Ms. Nyrae has delivered a novel full of witty dialogue, courageous, independent characters and sexual heat that can't be denied.

4 Stars--Romanctic Times Magazine
Readers will ride waves of exhilaration that flow into mind-blowing sexual tension. While the title alludes to the outcome, the passionate tides and surges are what fascinate from the onset.


Luciano groaned as Kaylee pushed against his chest. “You’re on your lunch break, Bella. Ignore it.” He tired to kiss her hoping she would forget the phone that he was two seconds from pulling out of the wall.
“It will only take a second.”
He shut his eyes as Kaylee eased out from under him.“Thank you for calling Bookends. How may I help you?”
Luciano laid there, rock hard, on edge, and for a moment, resenting her damn bookstore. He watched her talk to whoever spoke on the other end of the phone, her beautiful, dark-skinned body naked from the waist up.
She wore her braids tied up in some kind of bun on top of her head. Did she have any idea how sexy he found her? How much he hurt right now with the need to have her? Possess her? Even if it was only for, Luciano raised his arm to glance at his watch, thirty eight more minutes.
Without thinking, Luciano stood, stripped, and walked over to her slowly. He smiled. She studdered.
“Umm. Yes, I can order that book-”
Luciano pulled her braids from the bun watching them fall against her breasts. Grabbing her hair, he pushed it over her shoulders to lie against her back. He lowered his mouth to one pert nipple and sucked.
“I… I can’t look up the price right now,” Kaylee said into the phone, sounding a bit breathless. “Umm. The computers,” she studdered. “They crashed. Can you,” Luciano sucked harder, enjoying her unique taste as it tickled his tongue. “Call…back…later?”
Luciano moved to her other breast treating it to the same care. He didn’t want to lose any of his time with her today. Kaylee was strong and independent. He knew she would really kick him out at the end of their forty five minutes.
“Thanks,” Kaylee hung up the phone with a loud click before grabbing his head to hold it to her chest.
“Don’t think I’m letting you get away with that,” she told him. “I won’t tolerate-”
Luciano silenced her with his mouth. She tasted sweet. He felt like a volcano seconds to eruption.
Lowering his hand, Luciano eased into her pants and pushed one finger inside her. As soon as her muscles loosened up to accommodate him, he added another. Her body clamped tightly around his fingers. Her velvety, wetness urging him on. He wanted to explode right then.
“This is much more fun than that phone call, Kaylee,” he said a mere inch from her mouth. “Don’t you think?”
“Yes, but Luciano-”
He didn’t give her a chance to finish but again grabbed her mouth in a searing kiss. His fingers moved in and out of her warmth while she moved her hips to the same rhythm.
She panted against his mouth. “Yes. Please!”
“That’s it, Bella. Enjoy yourself, let yourself go, enjoy the pleasure I’m giving you.”
“I…faster, Luciano.”
He smiled, his erection throbbing with need, his pride soaring because of the passion he witnessed in her honey brown eyes. His body ached to possess her, to feel her tightness clamped around his cock. He needed to give her this pleasure first before he took her. Moving his fingers faster he felt her muscles begin to tighten, to pulse. His smile grew as she gripped him, her fingernails digging into his skin.
“Let loose, Kaylee.”
As her name left his mouth, Kaylee came, her breathing labored before she collapsed against him.
“My time isn’t quite up yet.” Luciano lifted Kaylee into his arms, her legs automatically locking around his waist. He reveled in the feel of her wrapped tightly in his arms. She was warm, soft, and spent. At that moment, for the first time, he wished he didn’t have to go back to work, but then, she’d still kick him out anyway.

Buy from Barnes and Noble
Magically appeared by Kelley Nyrae at 10:19 AM

They are getting rave reviews for the Kindle but it's still really pricey..around $400 I think. They are cool though, and wireless. So they are like their own little handheld computer. You can not only buy books but subscribe to newspapers and magazines, too. Very neat.

Congrats on being available at Kindle!!! Love the excerpt.

No Kindle. Don't really care about the wireless aspect and don't want to be forced to buy from Amazon just to use the thing. Love my Sony. And I can buy your book from your pub and read it on the Sony, too!

Congrats on another release!

I think the Kindle looks VERY interesting, too bad I can't afford it!

I've heard mixed reviews on Kindle, but I'm with Anny on this one. I'm going with the Sony.

They don't have Kindles up here in Canada, so I'm a Sony girl myself. And I love it. As Anny said, I can buy straight from the publisher and load it up on my Sony.

But either machine - yeah, they're pretty pricey.