I was lucky enough to get to read Regina's newest release, Feral Moon. Wow! That's all I can say. You guys don't want want to miss this one! 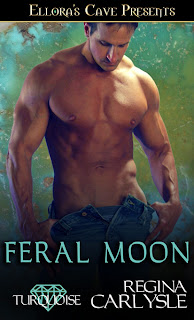 In the midst of a smoky club, a firestorm of lust whips through Mahara Jones, drenching her panties, heating her core. The abnormal desire leaves her helpless and confused until her boss, Titus Declan, sweeps her away into the world of were-panthers and she learns she is destined to be his mate and queen of the Turquoise Moon tribe. It is a night of secrets and discovery, of sexual pleasure without equal, but her hybrid psychic powers present Titus with a challenge of his own. Tonight it will take more than one strong were-panther to bring her fully into his world. With the sexual help of his closest lieutenants, Titus will claim his queen and ensure the future of their species.

Feral Moon starts off with a bang and explodes after that! We get a glimpse of all the delicious treats in store for Mahara within the first few pages and things only get better (and hotter) from there. Titus is the perfect hero to show Mahara this new world that she's always been a part of but never knew existed. He brings her into her new world with passion, emotions, and a whole lot of heat! Lucky for her, Mahara not only gets the delicious Titus for her mate but also gets to enjoy passion in the capable hands of three men through her transition. Titus is a delicious hero and Mahara a heroine we'll all be a little jealous of :)

Regina writes with such imagery that the picture in your head seems unbelievably true. Don't miss out on this one!

Ahhhh, Kell! Thank you. I have the SWEETEST friends. What a wonderful review! It means the world.

I SO want it now! LOL

Great review! This looks hot, hot, hot!! My mouth is watering over the cover...lol

Isn't that cover smokin??? I thought my heart would stop when I got a load of this guy. He's Mr. December on the EC calendar. Bet he works out 24/7.

I keep thinking this cover will SELL BOOKS. Keeping fingers crossed about that one.

Go for it, Anne. I need the sales. LOL. You can read it on your new SOny reader. Did I tell you they are selling those at my local Books A Million? I'm DYING here. I love my ebookwise but I'm drooling over that Sony.

Sounds Awesome! Can't wait to get my hands on it. Thanks for the recommendation and congratulations Regina!

Anne, you're going to love it!

Sophia, isn't that a hawt cover?!