Bonding with other women

I did something a little crazy this past weekend. Believe me, I know it will sound crazy when I tell you. I know a lot of people will think I am crazy, but after the experience, I took something totally different away from it than I thought I would.

I think most of you know by now that I'm really into Twilight. Well this Monday was the red carpet premiere in Los Angeles. A friend of mine and I decided we wanted to go and try and get spots to get in which meant camping out on the sidewalk in LA. Yep, you heard me right. Late Saturday night we drove down to LA and started our little adventure. There were already tons of people there and we met another friend who drove down from Central California to go with us. I won't give all the details because that would take forever, but it was cold...it was long...but it was also amazing.

We ended up right in the first row at the barricades for the red carpet, got tons of pictures and autographs of the cast, were interviewed on TV stations etc. And the night before the premiere even started, some of the cast came down to the line to visit everyone who took the time to camp out and took pictures which I really thought was amazing.

Honestly, that wasn't even the best part. I can't even tell you how many wonderful women I met down there. We ended up in line by a couple of wonderful women whom we ended up exchanging phone numbers and emails with. There was about 750 women in one spot and we all had something in common, something to talk about, something that bonded us. Twilight led into conversations about our lives, our pasts, where we're from and you realize how many other things you have in common with someone. We spent two nights and three days surrounded by other women, not having to worry about our responsibilities. Just having fun and in my case, spending quality time with other women which doesn't happen much in my day to day life. It was empowering in a way. It was something for us and something we could share with so many other women. I've honestly never experienced anything like it. I talked to people who flew in from New York and Australia. Women with kids like me or someone who's going back to school later in life. There were so many different personalities out there, but we all felt close and just spent time enjoying the company of other women. There was no snarkiness, not competitiveness (is that a word. LOL). I don't think it is something I will ever forget.

After we got our confirmation tickets 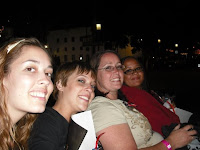 One last picture at the end of the event 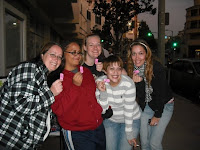 From the red carpet. This is a press picture and that is me behind Robert Pattinson.

Have you ever done something completely crazy like camp out all weekend for an event? Any experiences where were reminded just how precious our relationships with other women really are?

***** Edit***
My pictures are out of order. LOL. The first is the one from the red carpet. The second is the final picture after the weekend and the third is when we got our confirmation tickets.
Magically appeared by Kelley Nyrae at 10:41 AM

That sounds so fun, Kelley!

I saw clips of it on TV.

I've done it tiwce, both times for Garth Brooks tickets.

My husband and I did it back in 1992. We had a blast. It was like a huge family reunion, only you just met. This was in Rapid City, South Dakota -- rained the entire time, the warmest it got during the day was in the 20's and on the second day when it was supposed to get below zero at night, they opened the building and let us camp on the basketball court.

The second time was a few years later -- Warner Robins, Georgia. Much warmer and more subdued. The ticketmaster was inside a supermarket and the manager was not about to allow anyone to have fun. They let a few people in at a time to get their tickets and leave. Spoil sports.

I thank God for my girlfriends. I think it's important for us as women, mothers, etc. to have close female friendships.

Thanks, Bekki. It was a blast.

Yes, Sophia. Those releationships with other women are so important.

Front row - wow! Looks like you had a hoot! Was it truly all women? No men at all?

I took off with a couple girlfriends one spring, we flew to Vegas for a last-minute bachelorette party. Yikes! I still haven't shown my husband the pictures. Or the videos. Or the piece of clothing Carlos tossed at me from the stage. {blushing}

OOOOHhh sounds fun, Laura. I heard the total was 750 people and if I had to guess ratio I would say about 740 women and ten men. LOL

That sounds like a blast, Kelley! I'm glad you got a chance to get out and have some fun with the gals! :)

What a GREAT experience for you, Kell! It's wonderful to connect with other women and realize how much alike we really are. Lots of things in common. I felt the same at Romanticon. Women I'd never met before coming together like old friends.

Thanks Anne and Regina.