A note from the Three Wicked Writers: Please make welcome the wonderful Brenna Lyons!
Thanks for coming to blog with us today.


If you were asked if I was an introvert or an extrovert, which would you guess? Most people would guess I was an extrovert, but they’d be dead wrong. Being able to do something doesn’t mean it’s my preferred choice.

It’s largely true that the creative type tends to being introverted. There are those that break the mold, but your average writer is not a party-hearty social butterfly.

It is ironic that, in today’s world, authors--long considered by the IRS as performers akin to singers and actors--are expected to be social creatures. For many people who are introverts, this ranks somewhere between an irritation and terrifying. Which means we become performance artists...actors that should be considered for the Oscar, in some cases.

I’ve found online social networking much more comfortable than face to face or live voice work. Some others even have to pick and choose online types and cannot, for instance, stomach the idea of a chat room environment. That’s one of the many reasons I tell authors to choose something from as many of the subgroupings of online promo as they are comfortable with. If you can’t at least play off enjoying doing it, you can’t do it effectively.

Personally, I am at home in an online networking environment, though the fact that I’m a strong personality and the fact that I am a Mack truck in problem-solving discussions sometimes leads to misunderstandings that frustrate me and the other party involved. I enjoy almost any type of online social medium you can name.

I can take on chat rooms that are unmoderated and no-holds-barred, which some authors run in terror from. Thirteen years plus of being a Navy wife taught me well to put on a good front when I have to, and there is very little someone can say to embarrass me these days.

Still, playing the smartarse hostess with the Navy brothers is vastly different than doing it with a chat room crowd. For one thing, I do have lines that I make sure not to cross in a chat room, even when it seems I’ll say anything and everything to the readers. The readers, fun as some of them are, are not confidants like the brothers are, and there is such a thing as TMI.

Doing live voice (internet radio and like promos) is harder still. Having notes on hand and practicing with friends for likely questions is about the best you can do. It took classes in public speaking, speech writing, and public performance for me to be able to do even a live voice appearance, let alone a public reading or Q&A session.

Face to face promo is something you can either do or you can’t. Many of the more introverted can force themselves to do these sorts of promos and some so convincingly that you might think they really enjoy doing them.

That would be me, in most face to face situations. I’m the writer who carries stuff in my arms, hoping for an excuse not to shake hands, but I can if I have to. I’m the person who shoves one hand in my pocket at public readings or white knuckles the edge of the podium, because that’s how I learned to get through public speaking. I smile convincingly. I laugh convincingly...and honestly, when I do. But somewhere deep inside, I am cringing at being in a crowd. I even do Christmas shopping online, because the crowds in stores make me feel like hives are breaking out all over my body.

It’s not that I don’t like people. Well, admittedly, a lot of people annoy me, simply because they are thoughtless or rude or lack common sense, but in general, I love people. I love talking to people. I just don’t like them pressing in around me, and I prefer to have them come to meet me rather than the other way around.

So, the questions of the day for the authors... How introverted or extroverted are you? What can or can’t you force yourself to do believably?

And for the readers... Have you ever seen an author being introverted, or do you think we all hide it pretty well and deserve the Oscar? 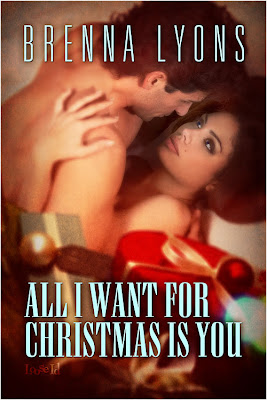 
Enter David, Zach's older brother. He's Robin's best friend, her confidant, the one person who won't think she's crazy to do this...she hopes. Since there's no chance the ladies' man will fall for her, she hopes sex with him will stop the dreams where David takes Zach's place.

It's the invitation he's been waiting for, three years of watching Robin with his little brother, then watching her grieve Zach. If only she wanted David for himself and not a convenient sperm donor to conceive his brother's child. Then again, in such close quarters, maybe he'll be able to convince her to something more permanent...if his parents don't catch wind of the whole thing first.

In her first seven years published in novel-length, she's finaled for 11 EPPIES, 3 PEARLS (including one HM, second to Angela Knight), and a Dream Realm Award. She's also taken Spinetingler's Book of the Year for 2007.

She teaches classes in everything from POV studies to advanced editing, networking to marketing.

Brenna enjoys hearing from people who read her work and can be reached at via her site.
Magically appeared by Regina Carlysle at 1:00 AM

I have people fooled. I'm actually shy if I have to attend an event alone. I paste a smile on my face and enter the room, praying I'll recognize a friendly face! I'm happier if I go with someone.

BUT...when I do signings, I'll talk to nearly anyone. When I join in a chat, I'm comfortable chatting. My bff's say I can always put a smile on their faces. And recently, an online friend called me 'outgoing'. So I guess I've put on an Oscar Winning performance!

Or maybe it's the 'author/split-personality thing: Introvert by nature, but extrovert while promoting??

I have to admit, I'm pretty uncomfortable in big crowds. A party where I hardly know anyone??? That just freaks me the hell out. I really prefer one on one conversation and maybe that's why I don't really mind book signings all that much. I really DO love talking to readers. So I guess it's a mixed bag for me. If I had to speak in front of a "live" crowd, I would be paralyzed with fear yet put me on an on-line chat and I'm okay. There is a certain safty in that, I guess.

In the end, I guess I really enjoy the on line stuff more than anything. No, I'm not particulary shy. No, don't laugh!!! My friends would say I am most definitely an extrovert but deep in my heart, I'm kind of shy.

Congrats on the new release, Brenna. The story sounds wonderful and perfect for the holidays.

Great point! It's funny, because my marker for 'greatness' as a writer has always been when Diane Rehm has me on for an author interview, but the idea of just a question/answer scares me to DEATH.

My online persona is a little outrageous... Naked World Domination and all that, but in real life? I love parties and social situations, but it is because I am a people WATCHER. I usually have quiet conversations from the sidelines.

I can do a formal presentation pretty well if it's rehearsed, but I am slow in my speech--my responses are more thoughtful, rather than quick and witty, so free form scares me--even the idea of the one-on-one like at a book signing--totally terrifies me.

YOu know it's funny because I consider myself more shy and introverted but often tell me the opposite. I don't know if I'm wrong or just good at playing something I don't feel like I am. LOL.

Thanks for blogging with us!

Nodding. People say the same thing about me. Most people assume I'm an extrovert, but I'm really not.

I like one-on-one conversations and tend to hang back at big events until there's a chance for one.

Oh, and thanks again for having me today!

Good point on the split personality thing. When I did theater (part of my attempt to desensitize myself to talking in front of crowds), I used to pretend I was the character to get through it. Maybe I'm putting myself in the mindset of "Now is author time?"

Thanks for blogging about this topic! I know some extrovert writers, but it's rare. I have to force myself into social situations, whether online or in real life, but I find I usually enjoy it once I'm there. But it's draining ... and then I need some time to myself to recover. ;)

Hi Brenna,
I could be in the running for that Oscar. I really am shy, introvert in person. I am scared sensless of having to speak in public. But in chat rooms or one-on-one I do so much better. It take me awhile to warm up to people so it's not that I'm antisocial, as one of my aunts once called me, but I just can't just jump in and be the life of the party.

Congrats on the release, will be adding to my TBR pile.