Note from the Three Wicked Writers: Please welcome guest blogger Ava Rose Johnson! This Ellora's Cave writer is hot, hot, hot! Also please note the winner of Regina's Edge of Nowhere giveaway is Sheridan_Amazon! Sheridan, please contact Regina at reginacarlysle@yahoo.com and thanks to everyone who entered.

The carols are playing, the lights are twinkling and erotic romance authors are drinking a little too much mulled wine - yup, you can be damn sure it's the holidays! And I love it, every single tinsel-y part of it. The greeting cards, the food and the family time. Gathering together with people you love - some of whom you haven't seen since last year, it's magical. And for most of us, 2009 hasn't been the easiest year so we most definitely deserve a wonderful holiday (and my fingers are crossed for snow!).
My Santa list is short this year - just one item. But it's an item I've been lusting after since I first discovered ebooks. It's an ereader. And it's so darn cool! I'm not a gadget person, but even I was excited when I was playing with all the settings and the buttons in the store. Finally I can shift my library of ebooks from my poor laptop onto this genius invention and then I can have every ebook I own at my fingertips whenever, wherever. It's been a long time coming, but it was worth the wait I think.
My latest release, Getting Hers, isn't a Christmas story but it does center around a woman who finally gets what's been top of her Santa list for years. And boy, did she deserve it!
Enjoy the excerpt and I hope you all have a wonderful holiday season, no matter what you celebrate!
Best wishes for 2010,
Ava Rose Johnson
www.avarosejohnson.com


Parker Stevens has one golden rule – never mix business with pleasure. But when Melanie, his curvaceous secretary whose sultry red lips turn him to stone, announces she’s leaving him, he’s finally free to claim what he’s craved since she first sashayed into his office six years ago.
Melanie’s been in love with her charismatic boss since the beginning and when a sudden blackout traps them in an elevator together, fantasy finally becomes reality. Parker brings her darkest
desires to the fore, driving her from climax to climax. How on earth can she leave him now? 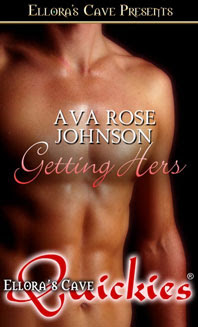 Excerpt:
She had the full red lips men dreamed about, the mouth that belonged on a guy’s cock. Her heavy breasts and rounded ass formed a perfect body that could bring a grown man to his knees. One whiff of her light scent of honeysuckle could turn Parker Stevens’ cock to stone.
And she was leaving him.
With a low growl of discontentment, Parker forced his gaze back to the report on his desk that required his urgent attention and tried to forget about his delectable PA who stood behind the glass wall that separated his office from hers.
His soon to be ex-PA, that is. After six years by his side, Melanie Rainer was shifting onto an entirely new career path, one that would see her selling sexy lingerie and sex toys to the people of Austin, Texas. A damn fine choice of career as far as he was concerned. But he’d be damned if he said he wouldn’t miss her, if he said he didn’t mind the fact she was leaving him.
She’s not leaving you, you asshole. She was moving on with her life. He knew better than anyone that Melanie Rainer was wasted as his secretary. She’d go far, no doubt about it.
His gaze flickered back to where Melanie was bent over the copying machine. With her sweet ass high in the air, it was all he could do to hold back a groan.
She straightened and walked to his open door. “Looks like this thing is broken, sir,” she said, slightly breathless as she jerked her thumb toward the copier. “I’ll call the company.”
“Hang on,” he said, getting to his feet, urgent report be damned. “Let me see if I can fix it.” He crossed the room, tried to ignore her scent that got him all worked up. Today, he caught a hint of something sweet, coconut. A new shampoo maybe? As he followed her to the machine, he glanced at the back of her head, noting the severe updo that had been Melanie’s choice of hairstyle since she’d first started working for Wilson Advertising. Conservative and elegant. Very proper. He didn’t know how many times he’d imagined how her blonde hair would feel sliding through his fingers, all silky and thick. Or how many times he’d imagined digging his hands in her hair, clutching the smooth strands as her mouth went to town on his cock.
More times than he cared to admit, that’s for sure.
“Well?”
As her soft voice prompted him, he looked from her hair to her beautiful face and stuffed his hands in his pockets as his pants suddenly tightened. “It’s the bottom tray, gotta be.”
She swiped a stray wisp of hair out of her face and shook her head. “I checked it.”
He grinned. “Well then, let me check again.” He leaned over and grabbed the handle for the bottom tray. As soon as he pulled it out, he felt the catch. “Paper jam.” He reached in and grabbed the misbehaving piece of paper from where it was stuck at the back of the tray. “Here,” he said, straightening with the crumpled page in hand. “After six years, you’d think you’d be able to figure that one out by now.”
Her answering blush had his cock straining further. It always went this way. He made a joke, teased her about anything, and the prettiest flush rose in her cheeks. And he nearly came in his pants. Even after all this time, it was still crazy to him that just the color of this woman’s cheeks could affect him so damn much.
“Fine,” she conceded, looking up at him from beneath her lashes. “Guess if I haven’t gotten it by now, I never will.”
“Ah, I’m just kidding,” he assured her, taking a step back to put some distance between them. He’d always thought that one of these days he’d lose control of his barely wielded-in lust and throw her over the desk, but so far he’d kept his desire on a short leash. The line between business and pleasure was a thick, unyielding one in his opinion. He’d never had a relationship with a colleague, not even a fling. But no one had ever tempted him the way Melanie did.
“Maybe your new secretary will get the hang of this better than I have,” Melanie said, turning back to the copying machine.
New secretary? He didn’t want a new secretary. The only woman he wanted doing his copying was her. His copying and a whole lot more.
“I doubt that, darlin’,” he said, folding his arms across his chest. At the endearment, the color in Melanie’s cheeks deepened and he smiled. How could a woman be so adorable and so sexy at the same time? “You’re the best thing about this place.”
Magically appeared by Regina Carlysle at 10:07 AM

Thanks for being with us today, Ava! The excerpt is great. Best of luck with the book. BTW..what kind of e-book reader are you planning to get?

Ooooh, this sounds good! Congrats on the book and thanks for blogging with us today!!

Thank you all for stopping by!

Regina - I'm getting the Sony ereader. I hope it's a good choice!

Thanks again for having me!

Let us know how you like your e-reader. :) And Happy Holidays! I think I'm ready for that mulled wine right about now. :)