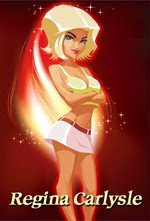 I don't think it would surprise anyone to imagine that a writer's life might be somewhat lonely. Even when my kids were still home, I found that hours spent behind the computer left me feeling a little bereft of companionship. I'm not speaking of everyday, incidental human contact but those of other writers and readers.

Lately I've been buried in my cave and writing like crazy to get a story finished. I'm not kiddin', I'm beat. By the end of every day even the joints in my fingers ache but YAY, I'm on target to get this story wrapped up in another few weeks. But the end of each day though I'm finding the need to unwind. I have several places where I go to just PLAY. Might only be for a few hours but I've found it goes a long way to just settling my brain. Does that make sense?

Last night I got on the Three Wicked Writers loop to just mess around. It's kind of a laid back place but there were about five of us on just talking a little bit of this and a little bit of that. We talked about promotion, contests, upcoming conventions and which ones we liked of those. One member had a new release yesterday and we talked about Kelley's move into a new house. Just little stuff but it helped me unwind after a long day of writing. Like many of you, I belong to quite a few loops. Most are set to digest and those I'm more active on, I have set to individual email. I just think it's important to find a place to kick back and relax and I've found a couple of spots where the conversation is fun and everyone feels free to speak their mind and relax after a long day.

So if you're looking for a laid back place to hang out, sign up for the Three Wicked Writers loop. We'd love to see you there. We can chill out together.
Magically appeared by Regina Carlysle at 9:41 AM

Yes! Hang with us at the Three Wicked Writers loop! :) http://groups.yahoo.com/group/threewickedwriters/

I really had fun over there last night.

I had a good time too. I love having a place to go to unwind.

I'm posting stuff over there, just trying to hang out and yahoo is soooo damn slow. It's very frustrating. Wonder if the other loops are like that today?