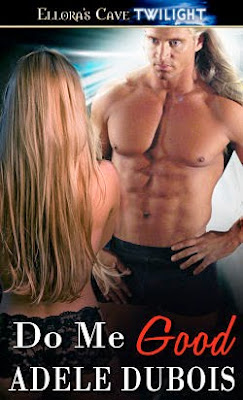 The hero of DO ME GOOD is my first otherworldly protagonist based on Norse mythology, and I admit I’ve developed a tiny crush on him. Gunnar is a fearless Nordic warrior cast into eternal servitude during a time when mortals answered to gods and goddesses. He becomes a celestial in the pre-Christian period before those who interacted with both gods and mortals were called angels. Gunnar is a Nordic Light Elf and so handsome he is “fairer to look upon than the sun.”

I hope you enjoy DO ME GOOD as much as I enjoyed creating this story. Here’s a sample of the book with a summary and excerpt. Thanks for reading.


DO ME GOOD by Adele Dubois

Penny throws her hot, but worthless mooch of a boyfriend out on her front lawn with his clothes, and vows never again to be a bum magnet. Exhausted by overwork and mountainous debt, Penny pleads for divine intervention.

Gunnar, a rebellious Nordic warrior cast into servitude by an angry god to learn humility, answers. While Penny sleeps, the celestial arrives to complete her chores, but she awakens and finds him. The handsome immortal kisses her, sparking a passionate, forbidden sexual encounter.

Dark forces seeking vengeance for Gunnar’s past misdeeds mark Penny as a target. To protect his lover, Gunnar tests immortality in a death battle using a god’s magical sword. But the strength of Penny’s love might be what saves them both.

He smoothed the hair at her temple and then rubbed a thick tendril between his thumb and forefinger. “I am Gunnar.” He pronounced the name “Goo-nar”.

A coarse brand of the sun, surrounded by a circle on the back of his hand, and covering the areas between his thumb, index knuckle and wrist caught her eye. His hand looked muscular and powerful beneath her gaze.

She touched the scarred skin with the tips of her fingers while he held a length of her hair, recognizing Freyr’s sacred insignia from her textbooks. “The pain must have been excruciating.” Without thinking, she lifted the old wound to her mouth and laid four kisses against its perimeter before pressing a fifth to the emblem inside.

A low tremor vibrated across her lips as they touched the ancient symbol on the white, extended hand. The brand grew warm and then hot on her mouth, though it did not burn. Her lips tingled and her body hummed with the pleasant sensations. She ran her tongue over the thick scars to erase the heat and then licked the center with the tip of her tongue in a tiny swirl before lifting her head.

His gasp of surprise was the last thing she expected as he released her hair and leaned away.

“Have I offended you? I’m sorry.” She searched his face for clues as to what to do next. Behind his shocked expression she found desire and longing and something completely unexpected.

Penny waited for his reply without letting go of his disfigured hand. She could tell his next words didn’t come easily.

“Kindness isn’t something I’m used to finding. Perhaps you’d be less inclined toward compassion if you knew what I’d done to deserve this brand of servitude.”

She reached out and hooked her arm around his neck to bring his face closer to hers. “I am Penelope. And if you are from Alfheim, I know who and what you are. I just don’t understand why you’ve come.” How could she deserve his rare, benevolent gifts? She was just an ordinary woman, barely scraping by.

“Sometimes we get what we need, simply because we ask. That’s the beauty and power of the unexpected.” His warm breath grazed her cheek in shallow rushes, lifting goose bumps across her skin. His wide, firm mouth smelled of sweet ground parsley and fresh-picked mint.

Gunnar’s eyes were like pools of deep blue water speckled with light that pulled her in and down. Down. Her breathing slowed as the sound of her heartbeat intensified in her ears and the inside of her mouth moistened. She licked her lips and became intensely aware of every nerve ending shimmering along her body. Her muscles tensed as if waiting for something unexpected to happen.

As if meeting a Nordic Light Elf in the flesh wasn’t amazing enough.

Just when she wondered how his mouth would taste, he brought his lips to hers and kissed her. An explosion of kinetic energy shot vibrations through her body that prickled every fiber and muscle, held her taut and then released, leaving her breathless.
**

Thanks for coming today, Adele! This excerpt is just soooo good.

I am buying this book on Friday!!! (or if my check comes before then... lol). I love your books, Adele and this one sounds fantastic!!!

Regina--Thank you so much for hosting me. I'm happy to be here. I appreciate your enthusiastic support.

Anne--Thank you for the welcome. Glad DO ME GOOD intrigues you!

Laurann--Aw, nice to hear you love my books. Thanks. :Smooch:

Tessie--So glad you enjoyed the excerpt. I appreciate your note.

Thank you for your notes, all!

Totally delicious. I'm buying the book.Will you send me the cover model?

I have to check this out. Even his name is sexy.

Desiree--Maybe we can share the cover model. Oh, that's naughty.

Minx--I'm glad you agree that Gunnar and his name are sexy. I thought so too.

I hope you enjoy DO ME GOOD. Thanks so much for visiting and posting.

Great excerpt! Would love to read this one, Adele.

Ilona--I hope you enjoy DO ME GOOD. Thanks so much for your enthusiasm!