Through A Glass Darkly 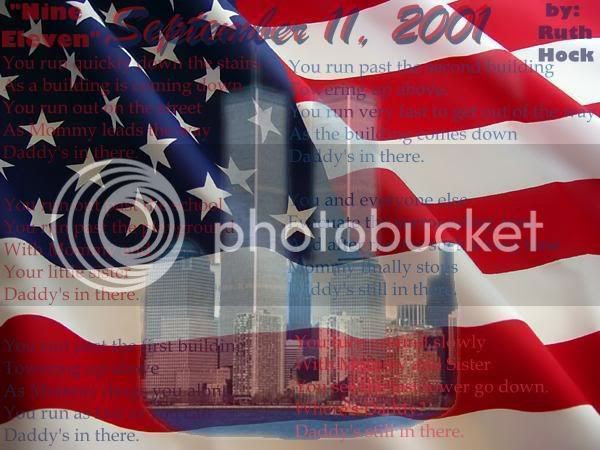 The line between right and wrong can sometimes become so gray, so obscure, that it’s difficult for anyone to fathom just which side they stand on. Not so for one twenty-five-year-old Iowa soldier stationed in Afghanistan. He’ll be receiving the Medal of Honor for his actions in combat. A rifle-team leader, without a thought for his own life, he put a wounded fellow soldier on his back and covered him. Stood tall in the line of fire. I can only imagine such personal courage.

He, and the two soldiers who died that day, would not have been there if not for the tragic events this country—this world—suffered nine years ago today when almost three thousand people lost their lives in a senseless attack on the World Trade Center.

Debate as to where this war should have been fought, when it should end, the amount of money it costs to maintain—and sadly, the number of lives lost to us—rages on. I’m just a writer. An editor. A small-business owner. A mom. A sister. A friend. I have my opinions, but I don’t have the answers. I doubt any of us really do. The War on Terrorism has a life of its own. I’m afraid it will continue for some time to come.

There are those who oppose the United States and its allies, saying our way of life is wrong—that our government doesn’t work—that our belief-system is contrary to the teachings of God. Well, only God can answer that last one, certainly not any man or woman.

I do know this much. A man, guided by HIS conscience, had decided that he and his church members were going to burn the Quran today. And now it seems they won’t go through with it. Why? I suspect the public outcry put a stop to it. I also suspect he came to realize that his life was in danger. I heard a lot of people asking why he wasn’t arrested. Why he wasn’t placed in custody based on national security issues. At first glance? Well, I think I had those same thoughts. But in taking a step back, I put away those thoughts. First amendment rights can’t be trampled. The Bill of Rights IS our way of life—the reason that quiet, unassuming Iowa soldier put his life on the line. The reason they all do.

But I have to ask—what would that man who wanted to burn the Quran think about a Muslim-American burning the Bible?

Respect. That’s what it’s all about. Living together in this world and respecting each other’s way of life. You don’t have to agree with another religion. But you should respect an individual’s right to worship as they believe. Wasn’t that something this country was founded on? Again, I’m a simple woman. I don’t have any answers, just opinions and more questions. But today, my heart is heavy. I sit here writing this blog with such sadness but also proud to be an American.

Proud to be a citizen of a nation that stands tall.

My heart goes out to the family members of those who lost their lives on 9/11 and pray they find peace. I’m listening to this today in honor of our troops—A Soldier’s Prayer by Colin Raye. http://www.youtube.com/watch?v=95CniRaLH3Q&feature=related

If you would like to post a comment as to where you were on that tragic day, what you were doing, I’d like to hear from you. Other than that, I’m not looking for kudos for this post, not looking for major commentary or discussion. I thought this would be a good way for each of us to truly remember what happened that day and how it has affected not only each of us personally but the world too. Just looking for prayers for our troops, prayers for this wonderful but flawed country we live in, for the world…and remembrance.

I won't be commenting to anyone. Just reading and remembering right along with each of you.

Tess MacKall--I was in my kitchen cleaning as usual. The small TV I had on the counter at that time was on. Out of the corner of my eye I saw BREAKING NEWS scroll across the bottom of the screen.

I stopped to listen--ended up sitting down in front of the TV, holding my breath. I saw that second plane fly into the building. I'll never forget that.

After it all kind of sank in, I put the five-year-old in his car seat and raced to the elementary school to pick up his sisters. Yeah, I was scared. So were a lot of other parents. The school started to empty.

I was at work--a school for special needs, vocational, and adult classes. We couldn't send the kids home because so many of their parents worked in the city. Many, many of our kids lost at least one parent that day. Our village was a popular bedroom community where firemen and policemen lived, though they worked in NYC. One young man at our school lost both parents that day.

My husband was working about six blocks from the towers. He didn't get home for three days. My son was at the submarine base in Groton, CT. He worked for months on subs that needed 24-hour turnarounds for national security. My daughter was supposed to fly into Newark airport that day because she was coming home for her birthday. Fortunately, her flight was an afternoon flight so she was safe on the ground.

Within fifteen minutes everyone in my family called me to let me know they were safe. In the midst of tragedy, our first thought was to pull together.

In the emergency room with my oldest daughter 7, son 6 and baby 5. After slamming my oldest daughters hand in the car door at a gas station. When the first view of it flashed across the screen. We were in Maryland getting ready to head back home to Yonkers NY about 20 min up from Ground Zero. We ended up staying the night in Philly where my then boyfriend of seven yrs lived who worked in the building of the Philly Stock exhange the original place where one of the other planes was supposed to attack. Took three days to get home and check on fam, frends and loved ones.

My sister Aimee's girlfriend worked in the Pentagon where the plane crashed in her wing. She'd gone back to work early from maternity leave. Weeks later they found her. She walked barefoot through glass and jet fuel. Will never talk again, all hair burned off her body.

I had woken up in the morning to get ready for work. My husband was already gone. I turned on the TV and just remember this sinking feeling. It was shock, sadness. I just couldn't believe it. I called my husband and we talked about it for awhile. I went into work. I worked in the ER at a hospital at the time. It was such a heavy day. We all couldn't pull ourselves away from the TV during any lull we had.

I will never forget how I felt that day.

I was at my computer in a chat room. News of what happened came up from several people in capital letters. Switched the TV on beside my desk, saw the towers and the smoke, heard the panic in the newscaster's voice. Awful day.

I was at work and my daughter called me to tell me. At the time, it didn't sink in. I just thought it was an accidental crash.

After that, it still took a long time for my mind to absorb the horror.

I knew the world, as I knew it, had changed forever.

Thank you for sharing the soldier's courageous story. We need to be reminded.

I was doing computer support at a public school. There was only one TV in the school. A teacher came around to the classroom I was just leaving and said something about American being attacked. We watched long enough to watch the towers fall then we all went back to work. We kept to our job, no one wanted to freak the kids out.

It all had a dreamlike quality to it. Like a nightmare you couldn't wake up from.

Sadly, I think a lot of people have used the event and what followed as an excuse to preach hate, which is easy to do when people are afraid. The only real answer is to practice love and respect. With those, you can't hate.

I was working as an RN in the emergency department. Someone told us what happened and we turned on the radio. When we heard about the plane hitting the Pentagon, we felt vulnerable and wondered who would be hit next. The ER was put on high alert and prepared for disaster. It was so tense. Our families were calling us, my adult niece was home alone, scared and crying. Suddenly there were no patients in the ER because everyone was home watching the news. I never want to be that afraid again.
Sarah

renI was at work, when news came on the radio. My daughter was in Albany, NY doing her physical and swearing in, she was in the process of joining the Air Force. Shortly after the scond plane hit, she called for me to come pick her up, they'd shut down all the state buildings. An officer met me half way and se and I went home and watched the footage for the rest ofthe day.

Her recruiter called several days later, asking her if she still wanted to join. It wasn't to late since she hadn't signed the papers yet and he wanted her to be fully aware of what 9/11 meant for military members.

She will be deployed for the 5th time in March to Afghanistan.

I was home that day. When I turned on the TV and saw what was going on, I drove across town to my kids' school and picked them up. I figured if the worst was about to happen to the U.S. then I wanted my children with me when it happened. All I could think about was reaching my family, especially when the plane crashed in PA, which is only a few short miles from us.

I was running the initial meeting for the year with my Girl Scout leaders, since I was the Consultant for our school. I led my daughter's troop and was the liaison to Council. We put the TV on as soon as someone walked in talking about it, and it was hard to concentrate on what we needed to accomplish, especially since one of the moms was married to a man from the middle east. Peace and love to us all.