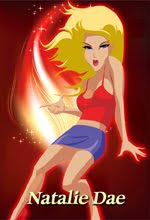 On Monday, because I’d let the housework go to hell the previous week, I decided I’d better clean. Properly. Not just one of those quick tidy-ups. So the bathroom thought Christmas had come early, and so did my cooker.

Now, I rarely clean the inside of my cooker. Disgusting of me, I know, but I also know there are many others out there who don’t do that either (come on, admit it!). Said cooker had started to, err, smoke a bit and smell when I turned it on. That might have had something to do with the charred cheese that drips off pizzas (highly bugging) and various other bits of food that seem to jump off the trays while cooking.

A weird side of me wonders if food indeed has feelings, deciding it’s bloody hot in there, and attempts a break-out.

Okay, forget I admitted I think odd things like that…

Anyway, Husband, the dear, had the week off. As I don’t clean on weekends unless I’m feeling insane (he does it), he rarely sees me when I’m cleaning. I kinda forgot he was home and did my usual sing-and-dance routine, paying particular attention, and going at it with much glee, to the part in Aretha Franklin’s Respect where the backing singers go: Whoop!

So, I’m cleaning away…

What you want! WHOOP! Baby, I got it! WHOOP! What you need! WHOOP! You know I got it!

And then I remembered he was home. So I said, “Pardon me, dear, but this is how I act when I’m alone.”

Note those words, my beauties…

About an hour later, after leaving the spray oven cleaner stuff to do its work, I decided it was time to wipe that off and have a sparkling oven again. One where I can actually SEE through the glass door. (Don’t… I’m foul.)

So, I proceeded to take off my jeans.

Hubby looked at me as though he thought the same as the bathroom (Christ, Santa read my mind…) and asked, “What are you doing, love?”

“Umm, is this another one of your daily rituals I’m unaware of?” (Possibly thinking: Just what does this woman do when I’m at work, for God’s sake? I thought she wrote!)

His confused face was TOO funny, and I went off to do my scrubbing in just my knickers, bra and top.

There was a reason for this mad behaviour. I’d been wearing white jeans. I’ve made the mistake in the past of cleaning while wearing this colour, or wearing black and getting a great big bleach splash on my clothes. But, you can bet your bottom dollar that now, when Hubby emails during the day and asks, “What you up to, love? Everything all right?” and I answer, “Cleaning the windows…” he’s going to be praying to the dear Lord above that I’m fully clothed and NOT outside with my knickers on show! 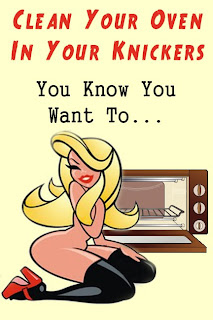 So, delightful bunch of readers, have you ever cleaned in just your underwear, or, been more daring and cleaned in the nude? Enquiring minds want to know...

Magically appeared by Natalie Dae at 2:25 AM

LOL, Natalie!! I have to confess that when using bleach, I often do the same--I've ruined clothes I like before, and refuse to do that again. So if I'm bleaching, yes, I do often remove clothing until I'm "safe," clean really fast, and then get fully dressed again ;)

I don't use bleach on windows though, so I think the neighbors are safe from unsightly sights from me less-than-fully covered :)

Good one, Natalie, and it made such perfect sense, really!

The least I've worn cleaning house is a bikini top and hotpants in the summer. Hubby asked if I'd be interested in washing his car next. I told him if he'd do mine. In the same outfit.

Hiya flchen! Oh, the bleach disasters...always on the nicest clothes or the ones you love, isn't it? GRR. Hahaha @ cleaning really fast.

Can you image the neighbours if you did clean the windows naked, though? My goodness. The gossip they'd create!

Hey Dita! I LOLLED a lot at you asking Hubby to wear the same kind of outfit. That's right, woman, play him at his own game. Mwhahaha!

Good lord. I've never cleaned in my knickers. I guess I'm too uptight. I think it's a Southern thing. We're taught to cover up at an early age--well, back then we were. Now? I can see my girls cleaning nude, happily vacuuming--well, that is if they ever did any cleaning. I think they are both going to require maids, though. IF THEY EVER MOVE OUT OF MY HOUSE, THAT IS.

By the way, after the oven cleaning thing was over, and you were still in your knickers...did you and hubby end up on the kitchen floor by chance? WOOT!!!!

Now, see...that's where you went wrong. No one in the house? Already undressed?

You try out various rooms with the hubster to see which one has the most potential.

Loved that post, unless I forget or just don't bother getting dressed ( which I have)I have several (a whole drawer full) of what I call cleaning shirts and a few pairs of ruined capris to wear.
Zina

LOL Anny. We were both so busy this week. Sigh! I realise now we should have taken advantage of the alone time, though...

Ah, good idea, Zina. I have "painting" clothes for use when I'm decorating. I should just wear those when using bleach or cleaning the oven. Saying that...I prolly won't clean the oven for another few months now.

Umm, I meant days. Yes, that's what I meant.

You mean I'm not the only one who cleans only for Christmas? What a relief!

With no hubby at home, I clean in my 'knickers' all the time!

Hahahah! You do, CZ? Funny!

HAHHAHA. Picturing his face, Nat. Okay...confession time. A couple of days ago I was doing laundry and it was TRUE, I had NOTHING to wear. Vacumed the entire house completely NEKKIE! Scandalous! hahaha. Sometimes like Flchen1, I whip off my top if I'm cleaning with bleach. Have just ruined too many tops with that stuff. Today I cleaned toilets while wearing just my panties. Once Mr. Regina came home early while I was topless and using bleach on the kitchen sink. He stops, raises his eyebrows and says...now that's a 'good look' for you honey!

Missed opportunities. sighhh...I can so identify with that.

LOL what a great post! I used to clean the floors and bathroom either buck naked or dressed only in a t-shirt and panties. Then I head for the shower so I have less clothing to clean. Cleaning makes me work up a sweat. Can't now with my son at home.

I used to walk on my treadmill in the buff but I can't anymore because my son is living with me. T-shirt and shorts time!

HAHAHAHAHAH @ Mr. Regina coming home to see you doing that. Too bloody funny. God, once my kids leave home, I'm going to vaccuum naked, just so I can say I have LOL!

Oh, Elizabeth, you did make me laugh. I just keep imagining all these women cleaning in the buff!

I agree. Cleaning in a T-shirt and knickers is so much easier too, and you're right, it's great to get in the shower after cleaning. I always feel really icky and manky when I do a massive clean.

LOL Natalie. And I was just heading to the bathroom to clean the shower. I wonder what mischief I can get up to? I have good inspiration after reading your blog. *grin*

LOL. My hubby would love it if I cleaned that way! I've never tired it, but I might have to!

Shoot! I think we should all live a little! lol. I mean, seriously, if we HAVE TO CLEAN why not make it a little adverturous?

I go both ways and yes I LOVE cleaning with Clorox...while wearing all black. I like to live on the wild side and I have ruined a grip of clothes yet I keep doing it. Sometimes I will just do the undies thing though too. I like to clean and then shower. I am getting all sweaty and dirty so after everything is clean I need to be clean too. VON

Okay, Ms. Shelley Munro...what did you get up to? SPILL!

Go for it, Madison. The look on his face will be worth it!

That's right, Reg. We should be daring with our brooms and mops!

Von, your comment about living on the wild side cracked me the hell up! Hahahahahah, too bloody funny.

Don't cook nude!I had a well-endowed friend who did major damage just lifting the lid off a steaming pot.

I've never cleaned naked. LOL In a one piece bathing suit, yes. One of those moments when I was going in and out of the house to keep an eye on the kids in the pool, but also trying to get a few things done. :)