All The Love In My Junk Folder 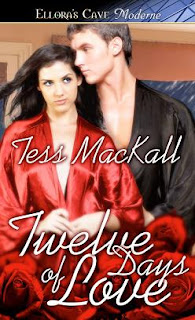 Blurb for Twelve Days of Love by Tess MacKall:
Eden Riley left her high school geek days far behind. Or so she thought. But when she returns to her hometown and comes face to face with the local heartthrob, sparks ignite like a chemistry set on crack. Super-smooth Nick Lancaster sets her nerves jangling and thrusts her libido into overdrive. But can the former geeky girl overcome her insecurities and jump his sexy bones?
Nothing suits former jock and debate team star Nick more than sparring with the one-time nerd. He’s just itching to get up close and personal with her high-velocity curves and tangle with her on the nearest bed.
With Valentine’s Day fast approaching, all bets are off when Cupid draws back his bow and Nick has only twelve days to convince Eden she belongs with him, in his heart and in his bed.
For a full excerpt, click HERE. 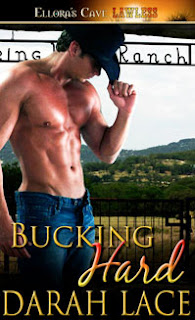 Blurb for Bucking Hard by Darah Lace
All her life, tomboy Bradi Kincaid has wanted two things—a career as a veterinarian in her hometown Grayson, Texas…and Mason Montgomery. Problem is, he’s her best friend and according to him she’s “one of the guys”. Convinced he’ll never see her otherwise, Bradi comes up with a sure-fire plan to get over Mason—flirt a little, dance a lot and get laid.
What Mason imagines doing to Bradi is just all kinds of wrong. But the woman on the dance floor isn’t the girl he grew up with. She’s hot and sexy and turning him on. Him and every other man in the bar. She’s also had too much to drink and is unaware of the trouble she’s inviting. He does what any friend would, he steps in, then sets out to teach her a lesson.
But before the sun rises, Mason discovers Bradi has a thing or two to teach him.
For a full excerpt, click HERE.
Magically appeared by Tess MacKall at 10:04 AM

Thank you so much for link up, Tess! :) I loved having you.

I know what you mean about those online guys. They all claim to have seen my pic or some such nonsense. I had a My Space fellow who claimed we had oh so much in common and wrote me an extensive email with his phone number. I checked his page and found it to be quite the opposite of mine. I thought to myself, in what alternate universe do we have commonalities? Has he even looked at my page?

Needless to say, he was conservative Christian and I am flexible, he was wanting a white picket life in his small town and I am city all the way. He reads the Bible and I write erotica. Can you see where this is going? Plus when one admits that their favorite people are Jesus and his Mom...He apparently doesn't get out too much. I wonder how he ever managed to find My Space.

OMG @ goldfish pic and guys like him. I thought they were money scams, like those ones asking that you look after a million pounds for them or whatever. Didn't realise they were asking to be loved. Glad I delete them without opening either way!

Big hugs on your release day coming up soon. Much excitement!

Lol Sounds like you ran into the same ones I did, Melissa. Had a couple I had to delete on Facebook a few weeks back.

Oh I still get the ones that are strictly money scams too. But about two months ago I started getting all those I saw your pic on your profile ones. And if you look at the next email from him, it's like an hour later and it's about all this cash he has got to get rid of. So I guess the first one is meant to try to capture your heart and the second to capture the "greedy" in ya. lol

Thanks, hon. I'm excited about Twelve Days of Love for sure. Woot...

I'm not that big on V Day either. I won't let my dh buy flowers or candy or even a card. It's a waste of money when he shows me every day with the little things how much he loves me.

Thanks for the mention, Tess!

Yes the 'i has needs for some to loves me.'. Ummm. Those kinds of notes are popping up on fb more and more. Of course we all know they are scam artists but it's really awful to think about those lonely, vulnerable people out there who will believe this stuff.

I am so glad that I am married. My brother does the online dating thing and he tells me some interesting stories.

Yep, FB is a hot bed of them right now Regina. And when one of them friends you, if you check them out and you share a bunch of friends you generally accept and have to find out later. Makes me wonder why those other friends haven't hit delete. lol

Jen, I saw one of those online dating site commercials the other day and they claim that one out of five relationships now begins online.

Whoaaaa...that's big. Don't know if it is true or not, but that's a whopping number.

But ya know...I guess it just mimics real life when you think about it.

You're very lucky and I applaud you for just sayin' NO. lol

Sounds like you and hubby have a great relationship that doesn't require you to validate your love with money. Good for you.

And congrats on your upcoming release this Friday. Yayyyyyyyy