Please give a warm welcome to Lily Sawyer!
By Lily Sawyer; I keep looking at those words and I can’t quite get my mind around the fact that I’m a published writer.
It all started when I found out that my favorite show, Star Trek, had a fandom. And that Trekkies, as we called ourselves, wanted to see more of our favorite characters.  SO they started to write their own fiction; the first fanzines were born. And I was quite pleased when I accidently came across a professionally published Star Trek novel while browsing in the library. It became the impetus for my getting involved in writing fan fiction. Star Trek was the first fandom I wrote a story for. Then later I became involved in other fandoms, first as a reader and later taking the plunge into writing my own fiction. I never dreamed I’d be writing romance stories; I had never been interested in the genre before. I have a friend who was writing stories for Harlequin Romance and to show my support I bought her books.
It wasn’t until 2006, after watching the movie Brokeback Mountain, that I discovered the world of gay romance fiction. I joined the fandom, first as a reader and then, because of the way the movie ended; I had to fix what I couldn’t stand. You should be able to love who you want without anyone telling you it’s a sin and that you’re going to hell because of it. The two characters from Brokeback couldn’t have the life they should have been able to lead, so I turned to writing fan fiction to change things so they were having a happy life. I met so many wonderful friends there and many of them had decided to write original stories and sell them to e-publishers. I decided to throw my hat into the ring. In 2009, I got my very first story published by Dreamspinner Press. The Finest Thing was part of their To Have and to Hold anthology that was released in June of 2009. I can’t tell you the thrill I had seeing my name on the cover and to have so many positive responses from readers and a nice review as well.
I got hooked on writing my own stories, and it wasn’t long before I got an idea for another one. Being from Long Island it was natural that I gravitated towards the water. So I had this idea for a merman story. I had no idea where I was going with it, but I just let my muse, and the merman, take me where they wanted me. And believe me, I was a willing captive.
My merman story is titled Catch of the Day and it takes place in the Florida Keys. 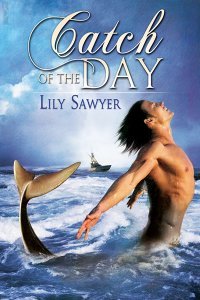 I agree totally with you that the end of Brokeback Mountain was sad. People really should be able to love who they want without people saying it's a sin. I honestly don't normally read mermaid (or merman) stories. I have had so pretty bad experiences. I might have to give this one a try.

Interesting read. I have thought of writing a story about a merman but hadn't as yet.

I've never seen Brokeback Mountain, but I have read a merman story that was excellent. Perhaps

Good luck with your book, Lily!

Perhaps... Yes, perhaps I ought not to comment so early in the morning because it makes me forget to finish my sentences.

I was supposed to say perhaps I'd give the movie a try.