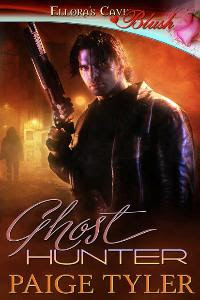 I'm so excited to announce I have a new book out with Ellora's Cave! It's a paranormal romance called GHOST HUNTER, and it's got a hunky hero, a kick-ass heroine and a serial killing ghost that's scary as hell! Not to mention a smokin' hot cover!

I love when I come up with an idea for a book out of the blue, which is what happened with GHOST HUNTER. When I heard my local RWA chapter set up a lecture with a team of paranormal investigators, it got me thinking right away about writing a book about a ghost hunter. Because the chapter is far from where we live, though, we didn't actually go to the lecture. I was a little bummed about that, especially since they were giving out EMF detectors. On second thought, maybe it was better we didn't go. Ghosts freak me out, so having something that can detect them probably wouldn't be a good idea.

Enough about me, back to the story behind the story. While I knew the hero was a ghost hunter named Trace, I wasn't quite sure how the heroine fit into the story, or even who she was. So, my hubby and I played around with a few ideas at our local PF Chang's (we come up with a lot of story ideas there!) We both decided that having the heroine Cassidy need the hero's help because her house was haunted or something like that didn't seem original enough, so we made her a budding romance writer who tags along with the hero and his team to do some research. Like any good story, though, it had to have some conflict, which is why Trace and Cassidy completely rub each other the wrong way right from the beginning. Actually, he thinks he's a jerk. But don't worry, Cassidy discovers underneath that rough ghost hunter exterior, Trace is just the man she's been looking for. It doesn't hurt that he's hot!

Okay, so we had our hero and heroine. Now we needed a bad guy. That's where the ghost comes in. He's not your standard, everyday ghost, though. He's a serial killer who attacked Cassidy that comes back from the grrave to continue his string of grisly murders, and she's at the top of his list. To make things even more interesting, not only can he do all the regualar ghostly stuff like walk through walls and materialize out of thin air, he can also take solid form.

I'm not going to tell you any more than that, though. Don't want to give too much away, you know. I will add that my editor at Ellora's Cave told me she got so caught up in the story, she completely forgot she was reading a submission!

Now that you know the story behind the story, I think I'll tease you with an excerpt. Enjoy!


Almost getting murdered by a serial killer gives Cassidy Kincaide a new lease on life and convinces her to go ahead and tackle that ghost-hunter novel she's always wanted to write. So, she hooks up with a gorgeous paranormal investigator named Trace McCord to do some research.

Cassidy and Trace rub each other the wrong way right from the beginning, but they have to put aside their differences when the serial killer who attacked her comes back from the grave to continue his string of grisly murders, with her at the top of his list.

Trace has to keep Cassidy close to keep her safe, and as they try to stay one step ahead of the ghost while figuring out how to stop it, he and Cassidy end up in each other’s arms. While Trace has a whole list of reasons why he shouldn’t get involved with her, he finds himself falling in love with the beautiful blonde anyway. And even though Cassidy started out thinking he was a jerk, she learns that underneath the rough ghost hunter exterior, he’s just the man she’s always been looking for. Now, all they have to do, is live long enough to be together.

Trace was only a few miles from the address Robert had given him for Cassidy when his cell phone rang. At first he wasn’t going to answer it, but some sixth sense made him change his mind. Now he was glad he had.

He was about to disconnect the call when he heard a muffled scream on the other end of the line. It was quickly followed by a loud clatter, then nothing.

Trace felt his chest tighten. Swearing under his breath, he shoved his cell phone in the pocket of his jeans and floored the pedal on the Hummer, running a red light to get through the intersection. The other drivers honked their horns as they squealed to a stop, but he ignored them. There was no way he was going to let Cassidy die.

Five minutes later, he slid into the parking lot outside her apartment, running over an ornamental fence and a flower bed to come to a screeching halt a few feet from the front door. Jumping out of the Hummer, he ran around to the back and grabbed his duffel bag full of gear. Throwing it over his shoulder, he raced up the steps and charged through the door into the building, scaring the hell out of two women carrying laundry baskets.

“Where the hell are the stairs?” he demanded, not wanting to waste time with the elevator.

The women timidly pointed around the corner.

Trace didn’t thank them as he ran in that direction. He hit the steps hard, taking them hree at a time. Once on the fourth floor, he ran down the hall, checking the room numbers on he doors. When he came to the right one, he didn’t even bother to slow down. Instead, he kicked the door in as hard as he could, reaching into his bag for his shotgun as the frame splintered and the door flew open.

He looked left and right as he entered the apartment, but there was no sign of Cassidy or Del Vecchio. Trace’s blood ran cold at the scene that met his eyes. The living room looked as if a cyclone hit it. The couch and throw pillows were sliced to shreds, stuffing still floating hrough the air. The coffee table was lying on its side, as were the two end tables, and the lamps that had been on them were smashed to pieces along with practically everything else in the place. Even the walls had been slashed.

Trace followed the sound of her voice until he came to the kitchen. Cassidy was standing in the center of the room inside a wobbly drawn circle of salt, ready to throw a handful of something in his face. She sagged with relief at the sight of him, letting the stuff in her hand trickle out onto the floor. That was when he realized she was holding a big container of oregano.

“Is he gone?” she whispered.

Trace nodded. “Yeah, he’s gone. But I’m getting you the hell out of here anyway.”

He didn’t wait for an answer, but simply slung the shotgun over his shoulder by the strap, then walked into the kitchen and swung Cassidy up in his arms.

She put one of her own around his neck. “Is it safe for me to leave the circle?”

Apparently she must have believed him because she didn’t resist. She cuddled the container of oregano close to her body and leaned against his chest.


He frowned. “Cassidy, you did great with the salt circle. It saved your life without a doubt. But what are you doing with the oregano?”

She looked up at him with big, blue eyes. “Isn’t it what you used to get rid of ghosts?”

His mouth twitched. “That’s sage and garlic. You can ditch the spaghetti spice.”

“Oh,” was all she said. Resting her head on his shoulder, she let the container of oregano tumble to the floor, then put that arm around his neck, too.

Giving the place one more look to make sure Del Vecchio hadn’t come back, Trace carried her out of the apartment and right passed the alarmed neighbors who had come out into the hallway to see what the ruckus was all about. Trace imagined they got their money’s worth seeing a big guy with a shotgun and a duffel bag slung over his shoulder carrying a beautiful half-naked woman in his arms. He abruptly realized he probably should have taken a few minutes to let Cassidy grab some clothes. But then the lights in the hallway flickered and he decided he could get her clothes later. They were getting the hell out of there.

“Is she being kidnapped?” one elderly woman asked another in a low voice as he and Cassidy passed them.

“If she is,” said the other old woman, “then I want to want to be kidnapped next.”

Any other time, Trace would have laughed, but right now all he wanted to do was get Cassidy someplace safe. Fortunately, he knew exactly where to take her.

Cool! A serial killer ghost in a romance novel. It's got so many things I love. Even better, you and your husband talked it out over dinner at PF Changs! That's it, now I have to read it!

Jen - LOL! Yeah, it's our favrotie restaurant! Thanks so much for the compliment! I'm so flattered! I think you'll really love it! Let me know how you like it!

I LOVED this book! The ghost villian was great, too. I feel a re-read coming on.

Harlie - Thank you so much! I'm so flattered! You totally made my day! I'm thrilled you enjoyed it so much! By the way, I'm already outlining Wes' book!

NIIIIICE! And also, that cover is hugely hot. *licking her chops* Why can't I ever see ghosts like that?

Lily - Thanks so much!

I love that your husband helps you out with your stories. I think that's so cute. Good luck with the release. It looks great.

Willa - It's totally fun! And he comes up with such good ideas! Thanks so much!