Provoke Me Is Out Now...Contest! 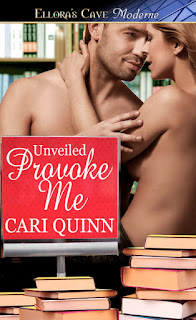 Since I had a new release this week, I thought I'd just mention that and direct you over to my blog where I'm running a contest until Sunday night.
TWO winners will win an ebook copy of Reveal Me, book 1 in the Unveiled series, AND any ebook of their choice from Ellora's Cave. It's always fun to go book shopping! So if you'd like to pick up one of Regina's amazing books, or Allie's, or Mia's, or wait until Tess's awesome new release, Strip Down, comes out in a few weeks, it's your choice! A comment and following my blog is all it takes to enter. Visit my blog HERE.
Provoke Me is a very special book to me because Kelly and Spencer were never supposed to be what they became. The story originated from, of all things, a tweet from Texts From Last Night. Are you familiar with that Twitter account? The tweets are supposed to be real texts people send each other, usually sex and/or drinking themed, and it's always good for a laugh. On this particular day, the tweet was about a guy who said he found his name on the girl he'd just slept with's list of “good...” I'll let you fill in the blank, but let's just say she found him satisfactory between the sheets!
From there, I built a story—a Quickie, I believed at that time—about a woman who instead keeps a list of men she'd like to sleep with. She started the list in college as a lark, and also as a way to feel more powerful when she felt like guys were overlooking her. But Kelly's list also included someone she maybe shouldn't have been lusting over...her boss. And of course, her boss finds out his name is on this list.
I fell in love with Kelly and Spencer when I was writing their story. Their conflict grew so much huger than my original conception. These are two very complicated people! The story finally ended up being 87K...and spawned my first ever Ellora's Cave series, Unveiled. I'm excited I get to close the series with one more story about them, though I have three other books to write first!
The blurb and buy link is HERE and the excerpt is HERE.
Writers, have you ever had a story you've written that basically mushroomed out of control? And readers, do you like reading more than one book about the same couple? Assuming there's a riveting conflict in each book, do they still interest you or would you prefer to read about new characters?
Have a great weekend!
Magically appeared by Cari Quinn at 4:00 AM

First off, congratulations on the new release!! I have to say I'm glad I hadn't read reveal me yet (which I have in my ereader at the moment), because I love that I can now read them back to back. I haven't read too many series that have the same main characters and enjoyed them. Having said that, I know it can be done, and done well! Jeanine Frost did a fabulous job with Bones and Kat in the Night Huntress Series.

I will be reading both RM and PM this weekend and I know I'm going to love them. Your style of writing and me--just click. Have a great weekend!

Yes! First I have to say I love Texts from Last night although I haven't read them in a while. They have a twitter acct? Uh oh! I'm in trouble. LOL.

Secondly, I love love love the premise! I'm so glad it became a full book! Thank you for pimping my books too.

Thirdly, Yep, Bad Boys was meant to be just one book, a lust bite at Total-E-Bound. It became a sequel of the same couple and a series. LOL! NEVER expected that but the mail was unavoidable. :)

I actually likes stories that continue. I read Lily Harlem's Shared and Shared, Too and it was great to revisit characters again. Plus, Lily didn't sugarcoat that sometimes a member of a menage isn't happy about the situation. And how it was resolved was great, too.

Also, TEB author Suzanne Graham did a great trilogy about two couples in a quad and it was great. Its nice to see that even though there was a HEA, the next book brought in more conflict and it made the characters more real to me. I felt like I knew them and liked them even more.

Yes I do like reading about the same characters in a series. I follow several series in fact and I look forward to the next one in line. An author can expand more and show different sides of a character if they are able to give new conflicts and new relationships to deal with. That's what keeps me going back.
Congrats on the new release!

Congrat to the new release.!
I admire writers who share how their stories come about and how they are inspired in creating their stories. I love getting so involved in a book that I drag my reading so it won't come to an end in certain books. I am one of those readers who love to read more about the characters in another story...*S*
I am putting both books on my gotta have asap list regardless...*S*
Thank you so much for this post, and I love coming daily as a follower of this blog as you all are such awesome authors...*S*
I love the excerpt!
Darcy

Congrats Cari on your latest release!!! I absolutely do like reading more than one book about the same couple:) Sometimes it's nice to read about interesting secondary characters, but I like when the author gives the main characters their due by at least giving them a couple of books. If the conflict and plotline are intriguing enough then I'll always want more of the same couple.

Congrats on the release! I am really looking forward to reading more of your books, Cari.

I love to read about how books come into being. Isn't it amazing how one little thing can spark an idea that will form into a full fledged book?! Congrats! I love the list premise.