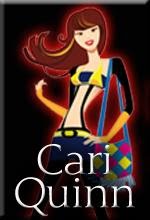 Today's my blogging day, and I invited a special guest. Okay, two guests! Most awesome author Juniper Bell and her heroine Dana Arthur from ...the Receptionist series at Samhain agreed to an interview, but I let Kelly Crossman from Provoke Me handle my end of it. Come back tomorrow for part 2!
And did I mention there are prizes? Check out what Juniper has to say about THAT below! Feel free to ask me and Juniper – or Dana and Kelly – any questions you would like. We'll try to drag the ladies away from their sexy guys long enough to answer!
Hi, I’m Juniper Bell. When Cari Quinn and I realized that our heroines (Kelly Crossman from Provoke Me and Dana Arthur from Restraining the Receptionist) had a few things in common, we decided to turn them loose on each other in a down-and-dirty, no-holds-barred, girl-on-girl interview. Has it ever been done before? Will it ever be done again? Who knows? In any case, they had fun, and we hope you do too. Just to make sure, we’re offering the first book in each series – Reveal Me and Training the Receptionist -- to one lucky commenter. And if you come back tomorrow for Part 2 and comment AGAIN, you’ll be entered twice!
Dana vs. Kelly … go!

DANA: First off, I just gotta say, Kelly, I like your style. You go for what you want and you don’t take crap from anyone. If you’re ever in New York, come on out to Low-Life, Long Island and we’ll have some cocktails. Tequila shots on me.
Okay, enough sucking up. On to the interview questions. Keep in mind, I’m a receptionist, so don’t think I’m going to go all Nancy Grace on you. I’ll keep it fluffy.
Your crush, Spencer, is a total hottie. But I couldn’t help notice that you don’t have sex just with him. Damn, girl! I don’t want to give anything away, but sometimes there are other people – ahem – involved. So here’s my question: do you like sex better when it’s just you and Spencer, or with some company?
(By the way, can’t you just picture Nancy Grace asking that? Or maybe Diane Sawyer?)

KELLY: Oh wow, I sure can. Look at you starting with the hard hitting in depth reporting first thing! Imagine if I had any really juicy secrets...well, I suppose I do. Except they're not really secrets when you're re-enacting them for crowds, huh? So...hmm. Honestly I'd have to say while I like having an extra man at my disposal now and then, I prefer to be one on one with Spencer. As much as I love when he goes all territorial on me, I love even more when he's on top of...um, erm, yeah, just us is fine. He's enough for me to deal with all on his own.
DANA: We’ve both fallen for our bosses. Plural, in my case. What’s the biggest downside and biggest upside of a workplace romance?
KELLY: We sure have, haven't we? Upside is proximity. If you're feeling frisky and your lover's a few inches away, well, that good old cliché of public bathroom sex started for a reason, right? Though come to think of it, we've never done it there. That's actually kind of tame when doing it in public's your standard schtick, you know? But on the loveseat in the boss's office...now that's a different story.
Biggest downside? Proximity. Kinda hard to hide your affair from your co-workers when your thong starts smoking whenever the boss walks by. Plus, smoldering looks and wicked thoughts tend to negatively impact productivity. Not that I don't have my priorities...which is why I make sure to keep Spencer in my sights as often as humanly possible. Never know when an opportunity to avail yourself of the nearest wall may arise.
DANA: If they made a movie out of your story (and I wish they would, that’s the kind of movie I’d watch!), who would you pick to play you and Spencer?
KELLY: You really are Diane Sawyer-ish! Though the name “Diane” is way too close to “Diana” and I hate that name. Not for any particular reason, just because.
For Spencer I'd pick...umm, I dunno. Paul Walker's yummy, but Spencer has more muscles. So maybe Paul Walker after some hardcore time at the gym? As for me, I'm not sure. It would need to be someone way better looking than me. Because if I have a chance to be gorgeous, I'm not wasting it on, say, Julia Roberts. Not that she's not attractive, but she's more of an ordinary gal like me. So my pick is Jennifer Lopez. Yeah, I know I'm not Puerto Rican, but she's People's Most Beautiful Woman this year AND she sings and dances! Holy coordinated. Who cares if we look nothing alike? She's hot!
DANA: You and Spencer work way too hard, if you ask me! You’re both workaholics because you love your bookstore so much. (And by the way, in my mind the store was called “Book Nookie,” not “Book Nook.” Just so you know.) Dr. Dana thinks you should take a vacation. What would you and Spencer’s perfect vacation be?
KELLY: Book Nookie really works! Damn, wish I'd known you before we named our new store! Spencer doesn't take vacations. I don't really either, but that's a financial hardship more than any other. Student loans are a bitch to pay off, you know? But he just doesn't believe in them or something. I bet the last one he took was in, like, 1993. Perfect vacation for us would be something dorky. Like... a trip to see the Museum of Natural History and then a night walking—and not walking—on the beach. Though I've heard sand is a real hindrance to beach...walks.
DANA: So about this club, Kink. Would I like it?
KELLY: Oh, I can so totally picture you, Simon and Ethan there! Ethan especially seems like he would be down with getting down in public. But you can always just watch. I think appreciating the scenery is half the fun of Kink. Just watch out for the weirdos who approach you with their hand down their pants. Some guys like to get the party started early...ick!
DANA: Thanks for answering my questions, Kelly! You’re a lot of fun, and I think all the nice readers out there should check you out.
KELLY: Thank YOU, Dana! I'm not one to ever consider looking at guys other than Spencer as more than living sex toys, but I gotta tell you, Simon and Ethan make a girl want to reconsider. If you ever get tired of them, send them down to Maryland for a spell, would you? We're VERY friendly down south!
DANA: I just bet you are! Friendly in all the right ways.
So if you guys want to know more about Kelly and me, here’s our blurby-thingies. And some linky-thingies. Come back tomorrow for Part 2 of the interview, in which Kelly makes me squirm. And not in the good way.
Restraining the Receptionist
Every deal has a loophole.

Dana Arthur’s new job with the firm of Cowell & Dirk is going well. Translation: the occasionally kinky ménage with her two bosses, Ethan and Simon, has been several months of politically incorrect bliss.

Except the relationship feels unbalanced. While Ethan is the undisputed master, the partners’ iron-clad agreement stipulates that Simon must be present as she performs her “duties”. And she senses there’s a subtle, powerful tug-of-war developing for more than just her body.

Once she surrenders to his wicked demands, Dana realizes there’s no going back. It’s time for a three-way renegotiation…this time, all or nothing.

NSFW!! Do Not Try This at Your Job. Contains highly inappropriate workplace behavior including m/f/m, m/m, bondage, creative use of office space and a high-stakes trip to Atlantic City.
BUY LINK...go HERE
Provoke Me
Book two in the Unveiled series.
Sometimes extreme provocation can lead to exactly what you need…
Attracted. Kelly is focused on the bookstore she manages. Sex is relegated to a list of candidates on her PDA. Only one man pushes all her buttons―her boss.
Fascinated. Spencer is determined to fight his desire for Kelly. For years they’ve bumped heads over the store they both love. But there’s more than one reason a potential relationship is too complicated.
Provoked. When Kelly and Spencer unexpectedly meet up at a sex club, all the rules go out the window. Suddenly there’s only one way this match of wills can end―naked, preferably all night long. In this battle for sexual supremacy, there are two winners—and two losers, when their stubbornness leads to the very thing each dreads most.
Reader Advisory: In a couple of scenes, Kelly and Spencer test “the more the merrier” theory.
BUY LINK...go HERE
Magically appeared by Cari Quinn at 2:00 AM

I loved the post and Dana I am so envious of you! I have yet t read Kelly's store but if it's anything like Dana's I think I need it now.
drmgrl99(at)yahoo(dot)com
Dawn xoxox

Oh...Both books sound great and I would love to win the first books to read before these. I enjoyed reading Dana's interview of Kelly and look forward to tomorrow when they switch roles.

This interview was great. Can't wait to hear what Dana has to say tomorrow.

Dana, I think that you would LOVE Kink. I wanna go...

One question Kelly...what's your biggest kink?

I loved the interview and look forward to tomorrow's to see what's said. Both books sound great.

Great interview...how unique! I have read both of Juniper's books and they are fantastic. Looking forward to learning more about Cari's books, though!

It was an interesting interview. I can't wait to read tomorrow's interview as well. Both books sound great.

Book Nookie! A couple of years ago I wouldn't have understood that. It would be a great name for a store.
jepebATverizonDOTnet

I've read both books in Cari's series, but haven't had the chance to read either of Juniper's. If Kelly and Dana are so much alike, then I'd probably really enjoy the other series, too. That was a fun twist y'all ladies did. Can't wait to see kelly's questions tomorrow!!

LOL!! I love, love, love this interview. LOL I have The Receptionist books on my kindle, and now want to read it even more.

Great and fun promo deal for the both of you.