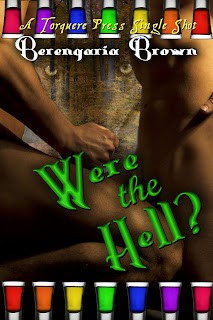 When readers ask for a sequel
Berengaria Brown

For an author (or aspiring author) selling the first book is the ultimate high. All those hours of research, writing, editing, proofing, agonizing over the plot and characters, is suddenly validated when a publisher accepts your book. All those nights when your friends were out partying, and you were sitting in front of a keyboard, typing madly, have suddenly paid off. You are an author!
Then selling the second book is another adrenaline rush. It was not a fluke! You can (and did!) do it again.
But what about when readers email you, asking for a sequel?
First there’s the, “OMG they liked my book that much!!!” scream of excitement.
Quickly followed by “OMG I didn’t plan the book with a sequel in mind!” scream of horror.
Then I sat down and reread the book carefully. And no, a secondary character didn’t jump out from it begging for his story to be told. But then I got thinking. What if...
What would make a werewolf world need MM relationships? How would this be worked out? How could it happen in this world? Why would it happen?
Before long the situation was consuming me even though I had other deadlines, and a day job I ought to have been paying attention to. Until finally, one day, Dai knocked on my brain demanding his story be told. Thank God!
For all those readers out there who enjoy a yummy werewolf, here’s a bit about “Were the Hell?”
“Were the Hell?” Blurb:
Septimus, is sent to a pack across the country to see if they have a solution to why almost no females have been born into his pack in over 30 years.
As soon as he walks into the meeting room he smells his mate. The lust between them is instant and fierce. By day they try to solve the problem of the gender imbalance, by night they fuck each other's brains out.
Septimus finally gets a lead as to why there may be no females born in his pack. An old man, Arthur, remembers a wizard threatening to curse his pack. Septimus and Arthur speak to a very old woman, Richenda who gives them some trails to follow.
Septimus’ duty is to help his pack. But he’d much rather be in bed with Dai. And is the situation even solvable anyway?

Excerpt PG 13
Septimus had sometimes wondered if he'd only ever been sexually attracted to other males because there were so few younger females in his pack, and the few there were didn't light his fire. But the minute he walked into the meeting room with the weres from the Forest Hill pack, he knew he was genuinely, one hundred percent gay. He could smell his mate.
His cock stood up and fought to get out of his jeans, stretching the fabric so tight that he was going to have blue balls for a week. The tiny hairs on the back of his neck were also standing straight up. His skin tingled, electrified with sexual arousal. And the scent of his mate was overpowering him, dragging him into the room with almost physical force.
His nose led him unerringly to his mate: a tall, lean man of about thirty, with tanned brown skin, dark brown hair, and liquid chocolate eyes. Those eyes were staring at him, the man's strong nose was flared smelling his scent and from the huge bulge in his pale cargo pants, the man was every bit as aware of him as he was of Mr. Tall, Tan, and Delectable.
As Septimus walked across the room, his cock leading the way, the man moved to meet him. Their gazes were locked, and Septimus was totally oblivious to everyone else in the room and the task he'd been sent to do. He was about to put out his hand when the other man reached him and grabbed his shoulders, pulling him in for a hard, body-blending hug.
"I'm Dai. We're mates." The words were harsh, bitten off, said almost as a challenge.
"Septimus. I know."
The Alpha of the Forest Hill pack stood just a few feet away. He coughed, cleared his throat, then said, "Gentlemen, let's get this meeting underway. Dai, you should sit next to Septimus, not in your usual place."
So even the Alpha smelled their attraction. That certainly proved he was not being misled by his cock. Damn! His dick had never been this big before. If only he could undo his jeans and give it some room before it broke his zipper.

Thank you so much for hosting me today.
Berengaria