Once again I've been thinking. Dangerous pastime I know, but I can't help it. Sometimes my last two braincells rub together and there's a spark. The book I read yesterday had the most perfect heroine. I mean she worked as a kindergarden teacher, spent her free time with the elderly & shut ins, ran marathons, never bothered with makeup, forgot to eat when she was busy and looked sexy doing it all. Excuse me while I barf...errr

I'm done for now because I have to describe the hero. He brooded and looked hot doing it. Yep, that's it. He didn't get any deeper. I know more about his finances than I do his emotional state.

Is anyone else feeling way on the nauseous side? Yeah, I know we joke about men being hot & perfect, but if that was all there was we might as well fantasize about a cardboard cutout.

Men with faults, women with attitude those are characters that are real to me. I like smart mouths and smart minds. Give me a woman with curves and bad hair days any day. Hero's who crack bad jokes at the wrong time, can handle curves & know how to cook.

There's something tantalizing about characters with real faults, failures, and feelings. Do I write that way? I sure as heck hope so. My heros might not always be GQ handsome and my heroines will never be size two, but they'll always be real, always talk back and always have plenty to say about everyone else. 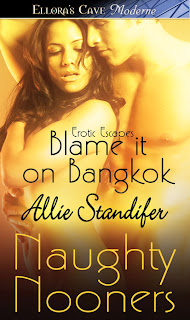 After seven years of married bliss Blanca isn’t about to lose her husband to a twenty-something stick figure. It’s time to pull out all the tricks in this curvy woman’s repertoire.


Now let's hear about your favorite hero & heroine and what makes them stand out for you!

Magically appeared by Allie Standifer at 10:37 AM

Ok you got me. In my (still under consideration) cowboy ms my hero is an ex bullrider. That is as imperfect as a man can get in my opinion. He doesn't limp but he has 'ghost pains' that cause him to rub over his muscled thigh where a bull horned him. Scars? Yep. He's had his nose broken but not disfiguratively, disgustingly noticeable. And the emotional scars? Whew! He's got a bucketful. I love that man!

His heroine? She's a gorgeous part Cherokee Indian with golden eyes, long black hair and sensuality that kills. And she's just barely over five feet tall with a few extra pounds she could afford to lose- if she gave it a little thought. Talk about insecure! I love her to death!

Hmm...so I don't have a favorite hero/heroine per se, but I love a sexy alpha male that can actually express his feelings. Not a pansy, but just admit they actually have them, and hell, if they can admit a wrong...swoon! Now the lead lady, she can look however, doesn't matter to me, but she needs to have spunk. Maybe not as much as, this here ninja warrior, but sass not to be walked over. And definitely give as much as she takes.

Can't wait for your upcoming release! Always love reading your characters, especially those B Girls!! Teehee!! Sure hope the wife wins out! Maybe even kick the twenty something's ass!! Help a girl out and let me fantasize!!! ;0)))

Calisa, you're book sounds great. I can't wait to hear a release date for it!
Elece, there's no girl on girl fighting...sorry!! It's a fun short story I wrote at Desiree's house just 'cause she told me I couldn't.

Mona,
Since I tend to explode things in the kitchen anyone who can cook is considered heroic to me :)

I'm with you. I hate the perfect H/H and would rather see scars.

In my first published book my heroine is older than the hero. She's had plastic surgery in a vain attempt to keep her straying husband. Inter the wise cracking Aussie hero, who cooks, surfs, fishes and would have loved the heroine even before the surgeries.

I'm currently working on a SF Rom WIP were the heroine is a human with no lips, just scaring where they used to be.

Hmmm....in my AU series, I tried to describe my girls as ordinary, though several come across as 'beautiful', their choices show them to be just like you and I. I did depict one as quiet and enjoying reading; one is insecure about her size, but her man loves her the way she is; and another, even though she enters a beauty pageant, is unconventional (at the time) in who she dates, which brings criticism. And the men are also ordinary, but on the handsome side:) And yes, they have their flaws!

Kenzie's heroines/heroes are portrayed in the same way; one hero is commitment-shy after his marriage fell apart; one is a paroled convict and trying to prove he's changed; others are just trying to find love.

Congrats on the new Quickie, Allie!

I had a short stint as an editor. It ended quickly because one of my newbie authors made the heroine so perfect I wanted to gag.

She also gave the Asian dude such a huge appendage it "slipped in" as they were kissing. ROFL!