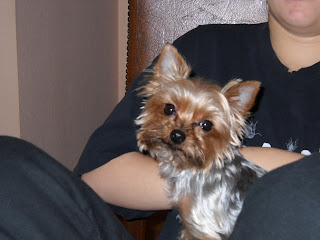 When Gypsy first came into our lives she weighed about 8 ounces and fit neatly into the palm of my hand. Sure, she was our daughter's puppy but the whole family quickly accepted her as 'ours'. Playful and fun, Gypsy is the expressive kind of dog that makes it almost seem as if she's always smiling or maybe even asking a question. She doesn't walk...she prances and at night she must curl up against SOMEONE to be able to sleep. She never got very big and remains to this day, a two-pound bundle of sweetness who loves to cuddle, loves to play.When my daughter headed off to college, she naturally took her baby with her. Gypsy has been her constant companion for many years so it only made sense that she accompany my daughter on her college adventures.

A week ago we almost lost her. Got a frantic phone call last Monday. Gypsy was sick. I urged my daughter to get her to the vet ASAP and she was immediately put into the doggie hospital. Worried sick about her, my daughter and I kept up communication throughout the week. The verdict? It wasn't looking good for our baby. I can't express the cloud of grief that washed over our home. I cried until my eyes were swollen (and bless you Allie for calling to listen). My husband was unusually quiet and withdrawn. My son called to talk about the situation. Through it all, my daughter continued to visit and the vet re-iterated there 'wasn't much hope'. Yes, we were looking at saying goodbye to our darling and I swear, I couldn't bear it.

So last Thursday night we talked with our daughter who said she had to do the right thing. That's a tough decision at twenty but she was determined to be strong. According to the doctors, Gypsy was just not responding to treatment.  Now, I'll say straight off that I pray but I often wonder if it's an act of futility. Was my faith strong enough? Don't know. Let's just say I doubted the strength of any prayers I might offer but that Thursday night, I sat outside for the longest time and prayed.

By Friday morning, I woke up with the feeling that Gypsy was GONE...just GONE. There weren't any tears. Just a sad, terrible acceptance that I would never feel her tiny body curled against mine or cuddle her in my lap as I watched tv at night. Sad. Just so very sad and empty. I talked with my daughter that morning never mentioning what would occur later in the day. I knew she couldn't take it and figured I wouldn't handle it well either.

Hours later, the strangest, oddest thing happened. My daughter called from her car. She was crying. She went on to tell me that when she showed up at the vet she was led into a room to say her goodbyes. Gypsy got UP from the table, walked to her and licked her hand. The vet was stunned and said this was the first response they'd seen from her. The decision was made. Gyspy was coming home. Yes, she is still sick but getting better every day. She is held, cuddled and responding to her meds and my daughter believes she is going to make it.

In the end I don't know if it was the power of prayer or the touch of someone she loves that brought her back. Whatever did it, whatever accomplished this miracle, I'm going to go with it. And I think I'll keep on saying those prayers.
Magically appeared by Regina Carlysle at 10:22 AM

Oh Regina! She is the sweetest thing ever!!! She will get better!! I think prayer works but I too sometimes feel like I have no faith...and why did i read this when pre-PMS'n?? Now I have got to go blow my nose if I can see through these tears!!!


ps--I can relate to the attachment..I have a sweety named Pris...furry black kitty we saved from the wild! She is my newest baby! We all luv her!

What is it about our pets that just tugs at us???? We go through our days just knowing they are THERE. We don't think about the prospect of losing them. I just knew that if we lost her such an important part of our family would be gone. I honestly believe the power of being 'touched' by a loved one makes all the difference. We have to have hope.

It truly is heartwrenching to lose a pet. Those who have never had and loved one like we do ours think us foolish. But when you love, you love, no matter if it's fury. My heart went out to you and your family when I found out about Gypsy, and when I heard how she had responded that day to Avery, I swear I felt your joy. I am so happy to hear she is getting better with each day. And with the all love she has, the lil fur ball will pull through. Heck, just to live with that much love she will keep going!!!!

Thanks Elece. She has always been our pampered baby and the thought of losing her was just HORRIBLE. Thank GOD she is coming back to us.

What a touching and inspirational story. I am the ultimate animal lover and just hate to hear sad stories of their passing. So, thank goodness, she is recovering. Too many people do not understand the grief animal lovers feel at the passing of their furry kids. Or the joy of seeing a sick one get better.
Sending prayers that all stays well.

There's nothing harder than losing a pet. I'm so glad she's doing better.

Hugs to you. She is the cutest thing. I'm glad that she is doing better and I do believe in the power of prayer. Lately, my prayers haven't been answered but I keep praying.

Margie, I just think she needed lots of LOVE.

Thanks, Amber. We're SOOOOO relieved. I can't tell you how tough last week was for us.

I've been wondering the SAME thing about prayers, Harlie. I think I'm a believer now. I just had to trust they'd be answered.

that was so touching that I'm tearing up now. The power of prayer is amazing. I believe in it so strongly. I hope you have more days with Gypsy.

Aren't miracles wonderful! And there's nothing small about them. When they touch our hearts and restore out little loved ones to us...they're gigantic wonders.

I'm so happy for you!

I can't stop crying. What a wonderful story. I remember sitting on the floor teaching our dog to eat and drink out of a bowl after we adopted her. I don't know what I will do when she is gone someday. She is such a major part of our family. My prayers are with your family and your little baby. She is soooooo cute!

Thank you Eileen. I've learned much through this thing. Don't give up hope. Express your feelings while you CAN and don't give up on the power of love and prayer.

((((HUGS)))) Carol and the card you sent last week meant so much. It's good to have friends who understand.

Jen, thank you. It's a sad fact that when we bring these little sweeties into our lives we eventually have to tell them goodbye. We were lucky and we'll have her a bit longer. I'll be seeing her on Thursday and she's going to stay with me for awhile, at least until she is much better. Can't wait to give her some good lovin'.

I must say that I remember a story about Louie, who belonged to my friend and author Julia Barrett. This beautiful German Shephard saved her life while she was out hiking one day. I've never forgotten his bravery in saving her life and how she eventually lost him to illness. So to Julia...God bless. I truly understand your grief in losing him.

Nothing beats the power of prayer and miracles! How wonderful that Gypsy is doing better.
Our pets are family...we worry when they're sick and love them!