Don't Call Me Baby – My First Swingers
By Elizabeth Black

Have you ever been to a fetish party? I've been to many decadent parties, in particular a sex toys party that nearly turned into an all-out orgy. At the time I was dating my current husband. I had never been to a sex toys party before and I can't remember how we were invited. But I wanted to go!
A comely married couple took to us. I was used to men falling all over me when I was younger, so seeing this particular attractive man practically drool in my presence flattered me, but what surprised me was his wife, who sat right next to him, didn't mind at all. That had never happened to me before. Normally, wives felt very threatened by me. When I saw her stand behind my then-boyfriend, her hands on his shoulders gently squeezing, I figured it out.
They're swingers!
I wasn't interested in pairing off (and if I had I would have chosen her over him.) but knowing we as a couple attracted another, more experienced couple thrilled me so much I still get passionate goosebumps thinking about it. We were looking over the sex toys, including a few games, and she asked me if there was anything in particular I liked. I said I wanted a good vibrator, since I had never owned one. She was surprised, and she helped me choose my very first rabbit. I know she wanted to personally show me how to use it, and I wish I had taken her up on her offer. She was very attractive in a tailored, tall, slim, short-cropped hair sort of way. She was also at least ten years older than me. I regret not taking her up on her obvious offers.
I wonder whatever became of her. She wasn't the first woman to whom I felt a strong attraction but she was one of the most memorable. That party influenced a fetish party scene I wrote for Don't Call Me Baby. Check it out below and get ready to take a very cold shower. 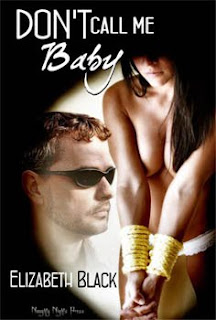 The scent of amber incense greeted her when she walked into the main hall, but her attention was on the banquet tables, which were stacked with food. Platters of fresh fruit and cheeses sat on one table. A crowd surrounded the centerpiece - a chocolate fountain. They dipped strawberries and fresh pineapple into the flowing decadence. The entire scene looked very inviting and Catherine suddenly craved a chocolate-covered strawberry.

As if he read her mind, Duncan picked up a cherry by the stem and let the chocolate run over it. He held it out to Catherine. “I see how you're looking at that fountain. This is your first treat.” The tart taste of the cherry mingled well with the sweetness of the chocolate. She reached for a strawberry but Duncan took her hand. “Not yet. I want you to meet the owners.”

As they walked through the crowd, hands reached out and touched her on her arm. Fingers ran down her back and in her hair. Sexy people winked and smiled at her, giving her the once-over, which didn't surprise her since she knew how sexy she looked. She eyed up the partygoers and saw a very attractive dark-haired man with a thick beard making out with a long-legged, blonde-haired woman. The man raised his head long enough to see Catherine staring at him. He smiled at her and invited her over but she stuck by Duncan's side. This is going to be quite some party. I wish I knew more people but I have a feeling I'll know them more than I expect by the time we leave.

They passed a crowd in front of a table covered in sex toys. Everything from slim vibrators to velvet cuffs and silk rope promised days of sexual bliss. She saw mannequins dressed in gimp masks and leather body harnesses festooned with metal studs. Maybe she could find a taboo sex toy a few notches up from what she was used to. She eyed up a metal spreader bar and wondered what it would feel like for Duncan to strap it to her ankles, pinning her in place for his pleasure?


Here is my blurb for Don't Call Me Baby.

Don't Call Me Baby is a fast-paced, quick-witted, sexy novel about a young woman exploring her sexuality and the cultural morés she collides with on a daily basis. It's 1983 in Maryland and Catherine Stone is sex on wheels. She plays the field the way men have done for aeons. Not content to strive for her MRS degree like so many young women her age, she seduces men of all stripes - married college professors, theatre students, virgins, complete strangers who intrigue her. She has already cost one man his job. But she asks herself lots of questions on her search to enjoy her sexuality. Why don't other women enjoy their sex as much as she does? Why do so many women and men look down on sexually free women, calling them sluts while sexually free men are called studs and Lotharios? She bucks at the double standards! Catherine has made no commitment to any man. She's free to explore and she gladly does so. No man can tie her down and no woman's judgment will stop her from playing the field to her heart's content. Does she meet her match in a new man who introduces her to sexual bliss she had never before experienced? When she tries multiple partners and bondage for the first time as a submissive, she believes she's found the sexual bliss she is looking for - and with a man who not only introduces her to the fineries in life but also cares about her like no man ever has before.
Naughty Nights Press releases this novel on September 30, 2011. Please visit my blog, web site, and Facebook page for updates, buy links, more excerpts, and reviews.

Excellent blog. I look forward to reading this in it's entirety

The more I read excerpts, reviews and tantalizing teases about this book, the more I am determined to have it- great blog also Lizzie- kind of makes you think about...things
Dawne P

Thanks, Morbius. Much of my life influenced that book, although it's definitely a work of fiction. I hope you enjoy it if and when you pick it up.

Thanks, Dawne. I hope people who read that book get a lot of out of it. It'll piss you off and excite you. Catherine is definitely my favorite character to date. My first swingers were also very interesting people. Other things happened that day that I didn't go into but we had a great time. :)

Well I am glad that you took a personal experience and wrote about it in a story. Great blurb! It is something that I am going to have to look for at the end of the month.

Love your frankness. The 80's were a time of budding sexuality in the world, it seems. More people open to more things. Excerpt is great. I'm putting it on my TBR list.

I have it to read, just need to find the time. My time was in the 90's and they were wild.

Eileen it was fun looking to my personal life for inspiration. I believe you have to live to be a writer. You can't spend all your time in front of a computer. Although I do spend a good part of my time tapping away at my keyboard, surrounded by cats. :)

Jean, I'm glad I came of age in the '80s. I hope to continue Catherine Stone's story as a series with four books. The first will be her freshman year and the last will be her graduating here. She's on the five year plan so that means five more books.

Harlie, the '90s sure were wild! So different from the '80s. You bought the book? Thank you! I hope you enjoy it.

Wow, all I have to say is that made my heart rapidly thump. That was just from a short excerpt. The 80's was definitely a era of high hair and great expectations. Best of Luck.