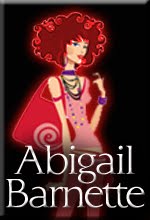 I love Danny Trejo. I claim to have a PhD in Danny Trejo studies. That's not true, because that's not a real major. But if it was, I would be the professor. And every student in class. I would be the dean of Danny Trejo University, and I would probably be the target of wacky hijinks perpetrated by a brash, anti-social fraternity on campus. In my imagination, this fraternity is lead by the late Rodney Dangerfield, my second favorite person in the universe next to Danny Trejo.

I think the reason I love Danny Trejo so much is his back story. Without going into too much detail, dude had a rough life. Like, real rough. But those first tumultuous chapters of his life didn't set the tone for the entire story. Now, he's a Hollywood action hero, at an age when most actors are thinking about retiring and doing only the occasional, emasculating romantic comedy. I'm looking at you, Jack Nicholson.

Well, as you know, yesterday was Anna Howard Shaw day. Or, Valentine's Day, if you buy into that malarky. I know, I know. I write romances, so how can I reject the most romantic of holidays. Plainly put, I don't find expected romance all that damned romantic. Yesterday, though, I believed in the beauty of love. Because I received (after requesting it via twitter) a heartwarming Valentine gift from my friend Jill. She made me Danny Trejo Valentines. And I'm posting them here for you to enjoy: 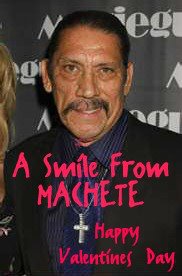 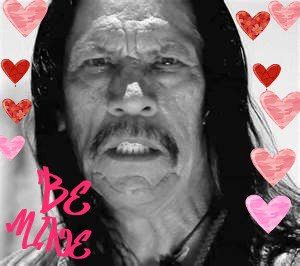 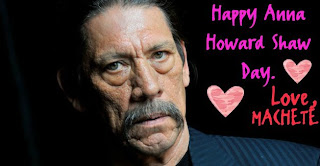 Magically appeared by Jenny Trout at 11:20 AM

Hahahha! That's awesome!
I love Danny Trejo too. Machete was freaking hilarious in so many ways.

I LOVE Machete Man! Yes, I dooooo! I love hearing his voice on King of the Hill so much. He's awesome! I always watch movies with him. Love action!!!!!

I get enough romance...well, actually I don't. lol But you know what I mean. LOL