I'm super excited today. You know why? Because it's release day, that's why! 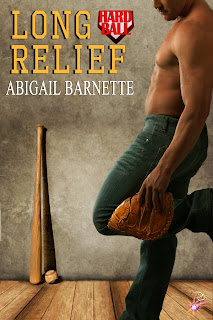 Do you like baseball? Do you like romance? Well, you are in luck, friend. My latest release is a contemporary romance set in the world of professional baseball. Let me tell you what, it was darned difficult to write without breaking any MLB trademarks. But it's totally worth it. This is the first in the Hard Ball series, which will release at key points during this years' baseball season. Long Relief should tide you over until opening day. Double Header will be out before the All-Star break, and Triple Play might distract you from you woes if your team doesn't make it to the post.

Successful entrepreneur Maggie Harper has lived and breathed baseball since birth. But when her father, once a legendary player, later a team owner, leaves her the Grand Rapids Bengals in his will, she’s in over her head. Orchestrating a successful season is foreign territory, complicated by a sizzling one-night stand with a player who definitely wants something more. After pitching a disastrous game that cost the Bengals the championship pennant, veteran pitcher Chris Thomas knows his days as a player are numbered. There are more important things to be worried about than the sexy new team owner, but Maggie’s hot-and-cold act is driving him to distraction. A woman has never come between him and the game before, but now he has to make a choice between his love of playing ball and his love of Maggie. When their entanglement is discovered, the stakes are even higher. Caught between doing what’s right for the team and what’s right for them, Maggie and Chris have to decide what’s more important, a championship season, or a chance at love.


To read an excerpt, and to own this fine book, hop on over to Resplendence Publishing!
Magically appeared by Jenny Trout at 2:01 PM

Congrats! Romance and baseball, it can't get any better than that!

Congrats on the release. I love baseball/sports stories!

Congrats on the release!