I went on a very exciting adventure the past couple days! As most of your know I'm fairly new to living in Southern California. Since living here I haven't really taken advantage of some of the amazing things you can do living here that you can't many other places. So, when I found out the Hollywood movie premier of Twilight was coming up and made a decision that its time to take advantage of living here. I spent a wonderful couple days doing something that I never would have done if not for living here and I did it all for FREE.

For some reason the Twilight saga has really struck a cord with me. I can't seem to get enough of the books and I can't wait for the movie. It has a very intimate feel that I don't always get when reading a book. I LOVE the characters they picked for the movie so the premier was extra exciting for me. This will probably be a long post so bear with me!

Brenda, one of my friends who also really likes Twilight planned to go to the premier and she was nice enough to let me tag along. We planned to leave really early (way before the sun rose) on Monday morning of the premier but Sunday afternoon she found out that there were already 100 people in line and only 700 would get in to the red carpet. I spoke with my hubby and confirmed with my MIL who would be staying over to babysit and they were both fine with me leaving Sunday night to camp out. Keep in mind I've never done something like this before. I felt an exciting high. Even though sleeping on the sidewalk in LA shouldn't have been exciting at all it really was. I packed, threw a bunch of snacks and water bottles into my bag and got everything together for my hubby and MIL at my house. After the day spent with family I was already pretty tired but my exhaustion decreased as it got closer and closer for Brenda to pick me up. She arrived around 8:00 PM, we picked up more friends and headed to LA. We were pumped to find out we were only about 150 in line! We made pallets on the sidewalk and hung out chatting about how crazy we were for doing this. The woman in front of us were also really nice so we ended up chatting with them too. Around 11:00 PM, the director of the movie, Catherine Hartwick drove by! To our surprise an hour later she came back! She was so pumped to see so many people camping she visited, signed autographs and took pictures with the fans. When she got to us she told us how much she loved our little "camp out" and even plopped down to lay in the middle of all of us for a picture! Catherine in the blond in the middle with the flannel shirt. 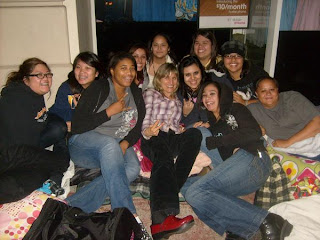 Isn't that amazing! She had a friend with her who films too and he recorded the whole thing. They said some of this stuff might end up on the DVD release! I can't wait to find out! After she left things settled down. We slept on and off. I didn't get much sleep but I did actually get more than I thought I would. People kept driving by and asking what we were doing and some people were so psyched for the next day that they kind of kept the rest of us awake but I was okay with that! I was going to see the cast of Twilight the next day (especially Rob Pattinson so I didn't mind). We woke up around 6:30 to the streets already full of college students, joggers, and people heading to work. The excitement continued as we spent more time chatting out Twilight and trying to guess how the day would go. Mid morning I took a walk around the block and watched them set up. I had a friend take a picture of me in front of one of the Twilight signs which I thought was really neat. 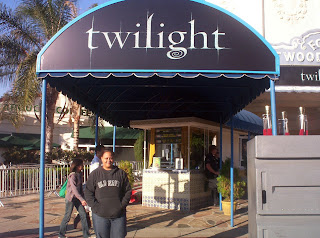 Keep in mind I hadn't cleaned up yet for that photo! Later I went to Burger King, changed and washed up before putting my stuff in the car. We knew they were coming to start passing out wrist bands around noon to the ever growing line that wrapped around blocks! I finally got my wrist band around 12:30. By the time we were led to the barricades by the red carpet it was 1:30. I was toward the end of the wrap around red carpet but was right by the bars at the red carpet! We had one row of people in front but I could still touch the bars and knew by the time the event started I'd be able to squeeze in. I didn't sit down or leave that spot for fear of losing it! Around 3:00 all the press were arriving. A local radio station was there for the event too. The crowd all got free Twilight bracelets and shirts from the company who made the movie. Camera people recorded the crowd a million times and we all screamed and even talked a bit giving little interviews or telling people who long we'd been there. Finally around 5:00 the radio station went live on the air and we all went crazy for those listening. A few minutes later the DJ let us know the first limo arrived (I couldn't see the car arrival). The station interviewed each actor as they went through. The crowd screamed and went crazy. The press flashed pictures and did interviews and I GOT PICTURES!!! I didn't take them of everyone there. I wanted to save my battery for the people I was most excited to see: Kellan Lutz, Jackson Rathbone, and Robert Pattinson!!! I got to see Kellan first. He is so dreamy! Beautiful eyes and smile and a big teady bear. He gives the best hugs! Things happen so quickly here that I had to choose autographs or pictures and I went with pictures. Here is me with Kellan Lutz who plays the vampire Emmet. 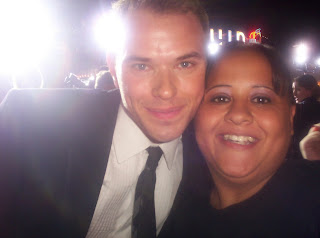 After Kellen, Jackson Rathbone came around. He plays Jasper, another vampire. All the women were screaming and reaching for the actors but I was lucky enough to be one of the girls who snagged him for a picture as well. He is very polite when he speaks to you. A real Southern Gentleman. 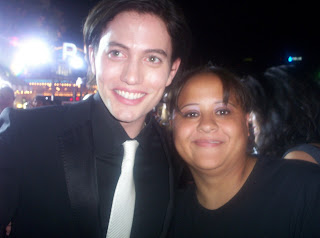 So far I was happier than happy. I got pics with two of the three people I'd came for. I got a few pics with other actors and saw a bunch more but Rob hadn't yet made it down to me. I was so anxious, so nervous that I wouldn't get to see him. He plays my favorite character in the book and I also thing he's a great actor, totally humble and so in awe that he's become so popular. He doesn't get it which makes him all the more endearing. Finally I saw him coming my way! I was so excited, my heart beat like crazy and my stomach dance with butterflies. When he was almost to me one of his "people" grabbed him and pulled him down the red carpet. I was heartbroken. After only seeing him a couple seconds at the MTV event, and all I'd gone through I couldn't believe I would miss him again! Then he turns and yells "I'll be right back! I'll come back" as they pulled him away. I wasn't sure he would come or would be able to but I still had hope! Guess what??? He came back! He was signing autographs, taking pictures and smiling and laughing with all the screaming women. Finally he made it to me. I felt like a giddy teenage girl but didn't care. Everyone was going so crazy for him and grabbing for him that I couldn't even ask anyone to take the picture for me for fear I'd miss my chance. I told him I loved his work, and that I'd made him something but in my excitement to leave I forgot it at home and stretched my arm to take our own picture and.... 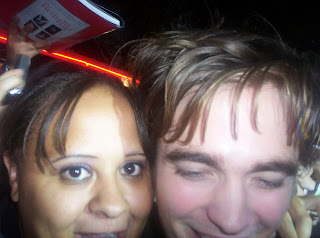 CUT OFF HALF OUR FACES!!!! Of course I didn't know it at that time. I hugged him again. He smiled and thanked me for my forgotten gift and then he was whisked away. Luckily close enough for me to snap another picture of him signing. 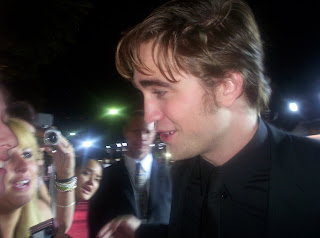 Finally the two day journey had come to an end. Of course I'm bummed about my picture but honestly, I can't even be upset about it. It was an amazing experience. I couldn't have asked for anything more.
Magically appeared by Kelley Nyrae at 12:06 AM

What a cool experience Kelley! Something you'll never forget. Sounds like fun!

Kelley....that was a fabulous recount....I can picture myself standing next to you screaming right along side you!!!!

Barb, It was so much fun! Magical.

Tonya,
The only thing that would have made it better is if you could have been there too :)

I've never done anything even remotely this exciting!! SOOO cool!

Kelley - I didn't know you were her in LA! We should meet for lunch sometime.
:)
G.

What FUN!!!!! The pics are so cool and thanks for sharing them. Too bad about the half-face one...lol. Life is all about making memories and it looks like you made a few. YAY.

Genella,
I'm about 45 min to an hour away in Riverside county. You live in LA?

Thanks Amy and Reg!

WOW! Very cool, Kelley! Thanks for sharing the photos!

Yes, I'm on the west side just off the 10 Frwy.
I grew up in the San Gabrial Valley, so I'm used to driving all over the place.
I'll keep you in mind before the next time I pop into town!
:)
G.

Very cool! That had to have been a blast. Even the partial picture has a story for you to remember.

Wow, that sounds like an awesome experience! Wish I could have been there.

Wow Kelley! That's so exciting! I am so happy for you. I was so confised when I first saw your pictures on your page and even left a comment or e-mail for you. BUT now I know!! Very cool senorita. You totally deserve it. You work so hard for your family - I am so glad you got a night out on your own. I am crazy happy for you! Love you! God bless <><