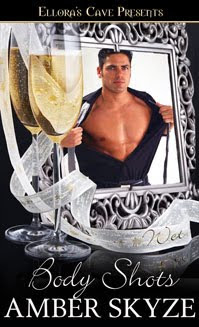 
First I want to start off by thanking Regina, Kelley and Anne for allowing me to be a guest today! I’m excited to celebrate my seventh release this year. To celebrate I’m giving away a copy of Body Shots to one lucky commenter.
The number one question newbie’s usually ask is - where do you find your ideas. For me it’s mostly music, television and the what-ifs.
In the case of Body Shots it was the what-ifs. Back in high school I dated a drummer in a rock band. Oh we were gonna rule the world. LOL. What did I know at the young age of 15? We broke up a few months after graduation. One day I wondered what happened to my high school sweetheart and imagined what it would be like if we ran into each other now (if I wasn’t happily married).
That’s when the premise for Body Shots was developed. Granted Reed and Sierra find each other ten years later, not the twenty ummm something I’ve been gone. And Reed is a singer, not a drummer, but you get the idea.
Ideas are everywhere if you just open your mind to them.

Blurb:
Got tequila? Sierra does, and Reed isn’t afraid to use it. He’s determined to do shots on every inch of her skin, but Sierra has insecurities preventing him from exploring intimate areas. Her insecurities won’t stop her from lavishing his body with the heady liquor though.

Ten years ago an accident tore Sierra Allen and Reed Walker apart. Now a chance encounter has them burning for each other. A bottle of liquor and a pool table has this duo ready to quench their thirsts with one night of body shots. But will one night be enough?

“Reed, it’s been ten years. A lot has changed in that time. I’m not the girl who left. I’m not that person anymore.” I’m not the woman you loved, she wanted to scream. Yet she couldn’t deny she still had feelings for him. Ten years hadn’t erased those feelings. How she wished it had. But the truth was she loved Reed as much as she did the day she walked out of his life—for what she believed was forever.
She moved to the side and started to walk away.
Reed grabbed her arm, twisting her around.
“Don’t give me that bullshit, Sierra. I know you. I can see the pain in your eyes. And I can also see the love.”
She shivered, hating his ability to read her. Her pain was from the fact she couldn’t stop loving him. She hoped he’d have moved on by now. Married and settled down. But part of her was relieved to know he hadn’t.
“Reed…”
His hands pulled her face closer. His lips descended, capturing hers. She didn’t resist. She accepted his kiss. When his tongue invaded her mouth, she parted her lips, allowing him access. She knew she should push him away. Instead she wrapped her arms around his neck, pulling him closer, devouring his mouth hungrily.
His arms enveloped her waist lifting her off the ground. She felt his bulge through his pants. It throbbed against her stomach.
She whimpered. It’d been so long since she felt a man inside her. So long since she had sex. Thoughts of having Reed inside her consumed her. Blinded by desire, she lost her grip on reality. Her legs snaked around his waist.
“Fuck me, Reed,” she whispered between kisses.
His mouth froze.
What the fuck? Why was he stopping? Wasn’t this what he wanted?
“Are you sure?”
“Yes,” she said, before sucking his lower lip into her mouth. She nibbled and released it. “One hundred percent positive.”
Holding onto her ass, he carried her over to the bar. He set her down on a stool, picked up his beer and took a long swig.
“Got any tequila?”
“Behind the bar.” She hitched her thumb back. “Second shelf next to the vodka.”
“Don’t move.” He dragged his lips across hers.
She tapped her fingers against the side of the bar stool, wondering why he needed the tequila. She swiveled the chair around to see what he was doing. He found the tequila easily per her instructions, now he was ransacking the bar.
“Can I help you find something?” Her amusement was only going so far. If he didn’t fuck her soon, she might change her mind.
“Lemon?”
“Middle of the bar, in that little cooler type thingy. Salt is down near the cash register.”
Maybe a few shots was exactly what she needed to cool her burning skin. His touch electrified her.
He moved around the bar, collecting all the items he needed. Placing them on the counter one by one he asked, “Have you ever done body shots?”
Magically appeared by Regina Carlysle at 10:22 AM

Thanks for blogging with us today! Your book sounds great!

I agree with Kell and Teri! This sounds really really good, Amber! Thanks for being here today.

Thanks Teri, Kelley and Regina. I'm excited to be here! :)

Great idea for a book. I recently saw an old boyfriend at our high school reunion. wow I would not have recognized him, he had changed so much. Oh well, we all look different I guess.
I have added this one to my get-this-one-now list.
Happy Holidays
JWIsley(at)aol(dot)com

"Have you ever done a body shot?"

Liquor, pool, hawt sex - what could be better?? :) Sounds like a winner, Amber!

Love the title and the premise.

Hi Amber!
Congrats on your release. Your book sounds great, and I can't wait to read it.
Happy Holidays!! :)
tl.etheridge31(at)gmail(dot)com

WOW! Thanks everyone for stopping by and all the wishes! It's so cool! :)

Congratulations on the new release Amber!!!

Congrats on the release and it sounds like an awesome story!!! I can't wait to read it!!!

Congrats on your new release, Amber.

A great excerpt means a great book! I look forward in reading it.

Congratulations on the new release! Your cover is gorgeous! I love the title and the book sounds awesome;-)

Yummy cover! The book sounds awesome, my kind of romance! Congrats on your new release and wishing you much success with it.

So... did you ever look up the old boyfriend and find out how he turned out? Inquiring minds want to know!!

Steamy, the idea was a great idea, we all go through "what if"s with our high school memories....

Can't wait to read it. Congrats.

Thanks for hanging with us! What a great excerpt! Sure got my attn! :)

Congrats on your release! You just never know where a story idea will come from...events from our past usually conjure up something, though!

The Tawania is the winner of the Body Shots contest. Please contact me at amberskyze@aol.com to collect your prize.

Thanks everyone for stopping by and supporting me on release day!