Wanna Feel all WARM INSIDE? Try a Historical Considering the US is pretty much swept up in an arctic blast, I thought I'd talk about things that are warm, comforting...much like a hot bowl of homemade soup. You know, cozy, cuddly, warm yer innards kinda stuff. Now what is considered cold in Texas is, admittedly laughable to you folks back east but believe me, we are COLD down south, too. Good day to stay inside, dig out favorite soup recipes or fix up a mug of hot chocolate. If you add a dash of bourbon to that mug, I sure won't tell *wink*.

Cold weather also brings with it the urge to pick up a good book. Now, my preferrences for times when I need comfort are almost always historicals. I have some well-read titles that, frankly, have turned yellow with age. They are worn to pieces but I still read them. My faves? I have all of Amanda Quick's regencies (with some Victorians thrown in). Love her stuff. Her heroines are quirkie but easily identifiable to modern women. They have curious minds, are intelligent, and yes, they are often flawed. I love Lisa Kleypas, Julie Garwood, and many many others. For years, we've heard about the death of the historical and each time, they have come roaring back. So yeah, all those dire predictions are just a bunch of hooey. What ISN'T romantic about taking a trip back to the past and living those days once again in a good book?

Some of the first romances I fell in love with were historicals and my favorite? The Flame and The Flower by the late, great Kathleen Woodiwiss. I was hooked on her and couldn't buy her books fast enough. I followed this with The Wolf and The Dove (medieval), Shanna, A Rose in Winter...you get the drift. Bought and devoured all of them. When I finally decided to write something of my own, I began with regency. A tough period because, though it was a relatively short time span there was quite a bit happening in those days. Research and lots of it was required. To date, I have two erotic regencies available (Made for Mischief and Chasing Temptation at Resplendence Publishing). I don't write them as often as I'd like because they are so time consumming BUT that doesn't mean I don't love them.

Author Cindy Spencer Pape has a new release today at Ellora's Cave so, if you are a historical lover like me, you won't want to miss this one. I'll confess, she is one of my critique partners so I've read quite a bit of this and it is WONDERFUL. I highly recommend you whip out a credit card and snap this gem up. What better for snuggling in with that mug of hot chocolate, hmm? 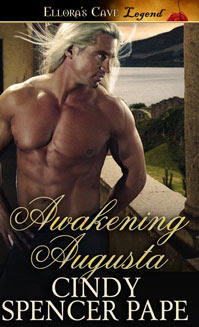 
Regency Scotland can be a lonely place, but Augusta MacLeish has four mischievous younger siblings for company—now if she only had money to feed them! Colin Fordyce has recently inherited an earldom, along with five wards in a remote Scottish castle. When he travels to meet them, he discovers his predecessor was skimming their funds. He also learns the oldest Miss MacLeish is absolutely stunning. A knock to his head leaves him seeing two of the buxom beauty, just as one kiss from her tempting lips leaves him longing for more.

A night spent together forces Colin and Augusta to marry, leaving them all the opportunity in the world to explore the sexual hunger between them. Colin delights in teaching Augusta all the pleasures of the flesh, awakening the wanton lover beneath her ladylike veneer. From Scotland to London, the flames burning between them refuse to be doused, and oh how they will set the Ton on fire.
Magically appeared by Regina Carlysle at 10:38 AM

Thank you so much, Regina! I agree about historicals being comfort food for the brain--I've loved them since way back when too! Of course this one is also HOT!

Hmm...will have to check out this title. Sounds yummy. And you are so right about historicals being comfort reads. I suppose it has something to do with being wrapped up in another time. Don't know, but those historicals are definitely comfy for me.

Like you, I started out with Woodiwiss. Loved those books and that's what turned me on to romances, period.

As for my favorite? Well, that's easy. The one I'm writing now. lol
However, it's not a regency or medieval. It's a western.

I will always have a soft spot for historicals because those are what introduced me to the Romance genre when I was younger. I will always have much love & respect to Julie Garwood, Jude Deveraux, Johanna Lindsey, Catherine Coulter,Judith McNaught, Amanda Quick and so many others (even though certain authors have ditched Romance for fiction and mystery :( ). There's just something about reading on times when it just wasn't proper to tell a man to go f*$# himself or still be unmarried at the old age of 25. :) Historicals today, historicals tomorrow, historicals forever!

I soooo miss the western historicals and I'm thrilled to see more of them coming out these days. Cut my teeth on those too, Tess. I don't know. I think we just like being caught up in another time and place. Talk about take you out of the current ho hum world!!!!

I totally agree, Sheridan and you and I have talked about this a lot lately. We seem to have the same favorites. HA.

Some of my favorites (and yours) have moved on to contemporary romantic suspense and damn it, I miss their historicals. Their voices are just soooo suited for the genre.

Sheridan reminded me of our chat about historicals and I neglected to mention two of my very favorites and Oft re-bought books. Saving Grace and For the Roses (both by Julia Garwood). Elizabeth Lowell's medieval Untamed is also smokin hot and so good I've re-bought and re-read it several times as well.

Hey Tess! As a lover of historical westerns, did you ever read the Only series by Elizabeth Lowell? If not, you should pick up the series. There are four of them. Oooooh...sooooo yummmy.

Definitely Regina, these authors who will remain nameless need to come back over to the dark side. I'd think that they would see that romance is back to booming & the demand for it is bigger than ever. I just finished a Amanda Quick historical binge and I think I'm going to move onto my Johanna Lindsey collection. Viva la Historical!

Oooh, love Lowell's historicals, though I like her contemporary stuff too. My Woodiwiss books are old treasures. Another favorite for medievals was Roberta Gellis, who's re-releasing some of her old stuff at Cerridwen! WOnderful books. Though her heroines were always feisty enough to tell the hero to go...errrr...stuff himself.

I love a good historical. I will have to check this one out.

Yes. These writers shall remain nameless, Sheridan, but most historical lovers already know who there are. And it's not really dissing them either...we're just saying 'come back, come back, we missss youuuuu."

Cindy, did you read the Lowell medieval series with the paranormal elements? OMG...there were three of those books and they were sooooo good. There was one hero she just left out there though. I kept waiting for his book. It was Eric, the hero who communicated with animals. She mentioned a connection in one of her contemporaries, as if there was some reincarnation or something but that didn't fly with me. I wanted Eric and Selena's story.

Hi Regina, you are all ready know how much I love historicals. Especially Quick, Garwood, Woodiwiss, Lindsay, etc.. And yeah I agree that some of these authors should go back and continue to write more! Though, I hope they are as good as previous ones. I bought a book from one of my fav authors and I was disappointed.

Congrats on the release, Cindy. It looks really good.

The first romance book I ever read was a Native American historical romance by Madeline Baker. I soaked up everything she ever wrote, then started picking up other authors like Connie Mason, Nan Ryan and Bobbi Smith. I still have a soft spot for them. Sarah McCarty has a few hot historical series that I'm enjoying right now.

Having said all that, I'd never attempt to write one. I know my limits. LOL

I know what you mean, Laura, we just keep wanting them to write more of those books we love. As a writer though, most of us understand how burn out happens and I suspect these writers just needed a change of pace. STILLLLLL. Come back come back.

Oh yeah--I'm pretty sure I've read everything Lowell has ever written. And I think she had publisher issues and they didn't want Eric's story, so she used his journal and a sort of reincarnation theme in one of her paranormal/suspenses.

And again, thanks! Y'all are making me feel all warm and squishy inside.

I loved the NA westerns. OMG Susan Johnson did the best work with her series that started with BLAZE. WOW, hot hot stuff.

I didn't know that about Erik's story, Cindy. I hate that! I sooo wanted to read what she might come up with and can't figure why any publisher wouldn't want it.

Wow, great cover Cindy! Congrats on your release.
I'm a latecomer to historicals, though I loved tales of King Arthur and westerns. But having now written two historical novels, I'm a big fan. :) It's so gratifying to make history come alive.

I completely agree, Cate! Thanks for coming by and keep those historicals coming.