I’ve been giving this a lot of thought because “Ranting” is serious business and I want to make certain I rant about the “right” thing.
I could rant about that moment when you realize: Oh. My. God. I am getting OLD!
No, it’s not the moment that popped into most of your minds. I was only eighteen when my hair started shimmering with silver—NOT gray—amongst the blonde. Only in my worst nightmares would I consider eighteen over five hills and on my way to that final resting spot of six feet we are all so glibly promised. Nor would it be when you realize your boobs are playing hide ‘n’ seek with your belly button, although that one DID make me want to rail loudly against Newtown’s laws on gravity.
It also wasn’t when the twinge in my fingers and the occasional LOUD scream from my knees alerted me to the new resident: arthritis that had moved in when I wasn’t looking.
No, for me, the defining moment when the panic of senile aging hit home was not when I found silver hairs up there but…
I thought about ranting over my black thumb and that no matter how many times I watered them or placed those adorable rice paper parasols over them I could not make my rock garden grow. I guess I planted the wrong rocks.
But as we approach tomorrow and the snowstorm that is threatening to dump loads of the white stuff upon us, I want to rant about snow. I’m a winter fan. No bugs, no humidity high enough to leave behind rivers of your own sweat with every step you take, and let’s face it, snow, when it’s pristine, can be downright breathtaking. It’s sinful that something so inherently beautiful can also be so dangerous.
I used to teach and loved showing my students how to cut out beautiful snowflakes from paper. Each flake, like Mother Nature’s flake, had us all oohing and ahhing. But I got to wondering how any of us really know what a snowflake looks like? Has anyone managed to keep them from melting long enough to stick them under a microscope? Yet with unwavering authority, we are told they each are different and intricate.
Unwavering authority—the same authority that once upon a time called Pluto a planet? The same authority that said the earth was flat or the center of the universe? The same authority that knew nothing about the taffy pull-and-push of the planets plates in causing volcanoes to erupt and mountains to pop up overnight?
I doubt science is going to show me the data about the intricate and individualized designs of snowflakes, but my logical side can’t quite swing their way. I figure there have been a whole LOT of snowflakes throughout the history of our planet, yet each one has been different? Are the fractal designs so infinite that no two flakes can EVER look alike? Fraternal twins should not look alike, based solely on chromosomal anomalies, but Mary Kate and Ashley Olsen look a lot alike. I look out my window in awe at the careening of snowflakes during storms; every flake looks pretty much like the next one, so again, who managed to keep several of them— because you cannot make a rule by testing only one—from melting long enough to microscope them out? Anyone know? I’d love the answer.
Maybe I’ll use that, the seeking of the truth about snowflakes, for one of my upcoming manuscripts.
Oh, didn’t I tell you I’m a writer? And just recently, December 1, 2010 became a published author with the release of Santa Is A Lady from the Muse It Up side of the Muse Publishing House. 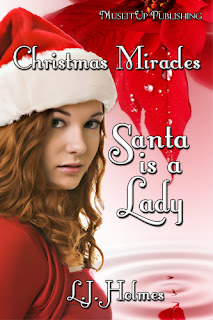 I haven’t cracked into the top ten yet, but I am hopeful…especially with one review I got that suggested it needs to be bought and made into a Christmas movie. (That came from a NY Times Best Selling author so I am meandering around here with my jaw scraping the floor. Not a pretty sight. Maybe if I Krazy Glue a dust rag to my chin at least the dragging jaw might accomplish something.)
And that’s not all. I have my second book, Forever With You, a short, itty-bitty story, coming out on February 1st, 2011 from the Muse It Hot side. This is one of my all-time favorite stories from my inner voice, named with much love, Nudge. It also has one of my all-time favorite Delilah K. Stephans covers. Let me slip an excerpt in here…just in case you might be interested.
***
The moment she rounded the house, a call went up. “Coffee!” one of the worker’s bellowed.
Just like the game, children play called Telegraph, the word traveled through the ranks, bringing all the men out from their assorted work places with lolling tongues and grateful eyes. They clearly liked working for an employer who thought of their well-being too.
Keith was the last to arrive.
One by one, the workers poured themselves a cup of the aromatic, dark liquid, added their own sugar and-or cream, stirred with vigor and then went off to sit on several of the tree trunks left over from the graders and dozers that had cleared enough land to build the house, garage, and enclosed pool upon.
Keith took a cup, and like his crew, poured himself some coffee, but unlike his crew, he followed her to the patio and one of the chairs near the umbrella table she’d placed there only last week, across from her.
Inwardly she sighed. Keith Patterson, of Patterson Construction, had been the image in many of her troubling dreams of late...
Dressed, like most of his crew, in tight, muscle clinging jeans, ugly, but sturdy steel-toed work boots, and by this time of the day, a naked chest, his flannel shirt tossed on some convenient branch somewhere; he was totally drool-worthy. She could not help but dream about touching that hair roughened chest, and the taut, work primed belly. His arms rippled, and when he was facing away from her, working, the flex of back and shoulder muscles brought her tongue out, metaphorically.
“How much longer?” she asked, trying to force her mind away from the drop of
sweat, glistening from the sun that was slipping slowly down over his bobbling throat to the treasures she’d noted beyond.
***
This story has a surprise ending that I’m pretty sure no one will see coming. It’s on sale at the Muse Bookstore. 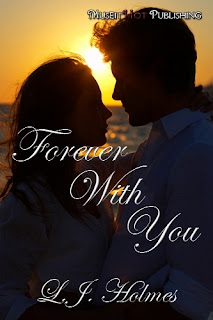 Was I telling the truth about the cover? It is so stunning.
Moving on, and believe me, Tooting My Own Horn doesn’t come easily for me. I’m much better tooting everyone else’s…but we Honest to The Heavens published authors must learn to Toot! The Bookstore link for this book is
https://museituppublishing.com/bookstore2/index.php?page=shop.product_details&flypage=flypage.tpl&product_id=104&category_id=69&option=com_virtuemart&Itemid=1
I have another book, The Pendulum Swings coming out on March 1st, 2011. Pendulum is a Time Travel…sort of…comedy romance. An Egyptian girl, enslaved by the Roman Empire, travels to today into the body of a woman who is extremely loathed by all those around her. At first she cannot remember who she is, but the name “Joanna” doesn’t feel right.
The hero, Joanna’s disillusioned husband, discounts her amnesia as another ploy by the original owner of the body she awoke in to regain control over him.
She has her work cut out for her, but although she doesn’t know it, there’s a very seductive fireplace that is going to change the tides for her and the man who loathes her. 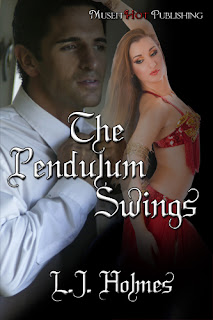 Meet the new and vastly improved Joanna More-Reed. Guess you can tell from the cover there’s going to be some erotic belly dancing in this story.
Here’s a synopsis from the book…
She awakens alone and does not recognize the word her “husband” tosses out at her—amnesia—nor the name he calls her, Joanna. She understands his hatred of her.
Bits and pieces of her darkened memory begin to return. She is Siri, daughter of Ancient Egypt, slave-lover of Petronius of the Roman Army, and her last memory is of Titus, Petronius’s general killing her. Is this the promised After-life?
Ten weeks after the crash, Siri is released from the hospital to a household filled with the starchiest people she’s ever known with one exception…her new daughter Mandi.
Bent on reforming the stiff upper lips of those around her, belly dancing, togas, dashikis, and schentis become the daily uniforms that wear down the resistance of the manservant, the most unforgiving of nannies, and the crispiest of housekeepers.
Laughter, respect and joy soon fill the household, but Jason keeps his distance knowing the other shoe will drop—until the night he decides, in a drunken snit, to dance with the fireplace mantle and literally finds himself up the chimney.
Will Siri win over her 21st Century husband and find the key to her Time Travel? Or will Jason Reed continue to loathe the woman he believes is still his conniving wife…the body Siri now owns?
The Link to the Bookstore for the Pendulum Swings is: https://museituppublishing.com/bookstore2/index.php?page=shop.product_details&flypage=flypage.tpl&product_id=126&category_id=73&option=com_virtuemart&Itemid=1
Muse’s two websites are www.museituppublishing.com and Must it hot is www.museithotpublishing.com
I have several blogs, three dedicated to cover blogs I do for other authors, not all of them are Muse, especially on my Muse Blog spot who have determined what I do is a Stationary Trailer. They are… http://linsownblog.blogspot.com
This one is specifically geared to Muse’s YA covers
http://linsownbooklounge.blogspot.com
This one is for Muse Authors and others with books from other publishers. That address is: http://linsownoyster.blogspot.com
These are more my own ranting pearls of dubious wisdom, horn tooting, etc. They are
1.) http://linsownspeculations.blogspot.com
2.) http://linsowngraymatter.blogspot.com
3.) http://linsownblog.blogspot.com
I can also be reached via my e-mail: www.spatzdkat1212@yahoo.com
My other contracts take us as far as April into 2012, so far.
Here’s a complete listing of all the books I have contracted from Muse and Muse It Hot.
1. Santa is a Lady-December 1, 2010 (available for purchase. Check link above.)
2. Forever With You-February 1st, 2011
3. The Pendulum Swings-Due on March 1, 2011
4. Twilight Comes-May 1, 2011
5. In From the Cold (wickedly funny)-June 1, 2011
6. This Time Forever (para normal, sort of.)- August, 1, 2011
7. Beyond Yesterday (powerful paranormal)- September 1, 2011
8. Champagne Afternoon. (very erotic)-November 1, 2011
9. The Christmas War-December 1, 2011
10. She’s Gone (a suspense filled mystery)-February, 1, 2012
11. Echoes From The Past (Blatant Time Travel, erotic with a lot of humor.)-April, 2012
12. Life’s Journey (An NDE story that shows us no matter how wonderful Heaven might be, our heart must return to earth and battles yet to be waged.)
The storm is coming, so I’d better get busy with finding something to contain snowflakes in and then ask my son if he’ll let me use his microscope fast! Think if we put the microscope in a vat of dry ice first and get it really cold, we’ll be able to test the different snowflake shape theory?
Magically appeared by Natalie Dae at 9:32 AM

You have done really great and I am so proud of you.

Great rant, Lin, so honest and funny. Thank you! And yay for you and your many publications - may there be many more!

Thank you both for follwoing to the generously Wicked Writers. I enjoyed figuring out a rant and the opportunity to boast about my writings.