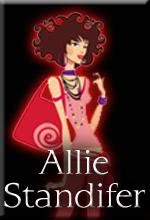 Amazing tales, Allie! You're so lucky you got to see such a varied set of activities. Fire play, knife play, fancy rope work...I'm eternally jealous.

And by the way, Three Wicked Writers is going to be my pick of the month in my newsletter, coming out in a couple of days. After your series, how could it not be!

While I was cackling at almost everything you wrote, this bit nearly killed me with shared horror: "I now know he grunts when he comes then hisses out a long loud breath all the while able to keep his eyes wide open & staring at me. My education is growing by leaps and bounds."

Oh and BTW, I would never leave you! I'd be your wingman. Was the guy in the kilt at least somewhat attractive? Sorry, have to know since we were introduced in both blogs........

Lisabet, I'm thrilled you've picked 3WW as your pick of the month! Thank you!!
Harlie, next time I head out for a new misadventure I'll be sure to grab you. Yeah, the kilt wearing winker was good looking, but way too aware of it. Not that he did have a BIG reason to be proud! Wow, did he ever!

LMAO! This is just too funny! You certainly had quite an adventure. How interesting to see activities we have read about in various books and wonder about how it all really works. I'd love to see your humerous outlook of this excursion published as short story. I am sure many more people would enjoy sharing this adventure with you.

Allie, I live about an hour out of Dallas, so I can be anywhere fast. LOL!

So Mr. Kilt was arrogant? At least he had a reason to be....LOL!

You know it just occurred to me that some day I may regret sharing these...ahh tid bits. Just in case I end up with FBI investigating my background again.
What the heck. I was there. It was interesting & that's another check off Desiree Holt's bucket list :)

I love starting my day with howls of hysterical laughter!!!! OMG..imaging it ALL. What an eye-popping experience. Unforgettable.

OMG!! I am so glad I read the rest of the story. I'm still reeling from all you saw and I probably would have reacted the same way.

Allie, you are a hoot. I laughed till I cried after reading about kilt man. Thank you for sharing your story.

Facepalm
She made eye contact. She kept making eye contact.
The menage went on for a while, and they kept nudging me, and I have to tell you it was tempting, but I'm happily married and I want to stay that way. So I'll write about it instead.
My mistake? The pony tail. I had no idea that in this place anyway, pony tail meant Dom, or seemed to.
The lady who whipped later became a whippee, but only after she'd taken out a pony tail and taken off her leather gear, to leave a nice turquoise bra and panties set.
The fire play was kinda beautiful and very artistic. Honestly, some of these people could have joined the Cirque du Soleil. Perhaps that's what they did in their free time, who knows?
So it's Chicago next!

Good lordy my gracious!! What a tale! Though I laughed myself silly, I have to say, I'm extremely envious. I've always been a curious cat, but your story has truly piqued my interest. I think my penis hurt after the knife story. Well, it would if I had one. Lol! But the kilt man's story did me in. Thanks for continuing this story with no mention of belly button lint! Can't wait to hear about your adventures in chasing taxis. :0)

LOL! Glad I opted to stay quietly in the hotel.

You guys are crazy biotches.

Oh my. I thought I was being naughty by watching the Chippendales on stage!

I recommend handcuffs for the wayward ... cough... friends. That way a window licker such as you can't get lost if your cuffed to them. lol!

Oh yeah, I'm going to cuff myself then walk into a D/s club. I get myself into enough trouble without additional help!

I rate this a 4-tissue story. I laughed so hard I cried and used 4 tissues to make it through. Darn tears fogged up my eyes so I couldn't read and heaven knows I didn't want to miss a word. Not ONE single word. Great job. What fun.

Mari, you were no innocent in this. If I remember correctly, you & your wine, were very encouraging & wanting me to take pics! Then again that might have been your partner in crime. I'm writing one BDSM book for the 1-800-Dom-help series. That's what started this whole thing. Me & my need for details. And what details I have now.
Warning to anyone thinking of following our (my) footsteps. Check out the club first. Contact the owner & let them know exactly who you are and what you'll be there for. Otherwise I'd probably be locked up in a cage with a collar & Kilt-man holding the leash!

Okay. There is something I've just gotta know. And no soft-pedaling here either. You haven't done that so far, lol, so I suspect you'll be honest now, too. LOL

Did any of you gals get WET? And I don't mean did somebody spill a drink on you either!

I think once that BAK went where it did, my "window lickin'" self would have been out the door and running straight into traffic.

But the fireplay sounds pretty amazing. See? Guess there is some kind of fascination in all of this for everyone. LOL

You cracked me up, Allie.

Thanks so much for sharing your experience in your entertaining way, Allie. I was able to picture it in excruciating detail. LOL

Wow..loved knowing about it all. Fire play I never even heard of it. Glad you escaped alive, more or less.....Wish I had both the nerve and the opportunity...Jean

Tess - no. I was quite relieved, really. After all, it's an expensive hobby!

I didn't, but that's because I was too busy being scared of getting into something I couldn't get out of. Plus the whole not talking thing didn't help out.
At least now I can say 'Been There, Done That'!

My jaw is on the floor! I have studiously avoided hitting any club with Sam Cayto, but now I kinda want to!!!
Alright, not kinda...Holy @&%*!

I loved the second post. Thanks for letting me live through you. i HATE TO SAY IT BUT BETTER YOU THAN ME.
z

Hey, I just saw your post. careena said there were other authors coming through--I wish I'd known y'all were hanging out. We (an Aussie friend and I) were there too that night. And in the big room during the fire play. He had his sub so deep into subspace that he actually took the time to chat with me. Three seconds and then it starts to burn. Eek!

Isn't it a great club?

What a GREAT 2parter read! Are ya'll going to RWA in July so I can drag ya'll to this club??? This sounds like the kind of adventure that only a few people (outside those who live it) ever have a chance to see.