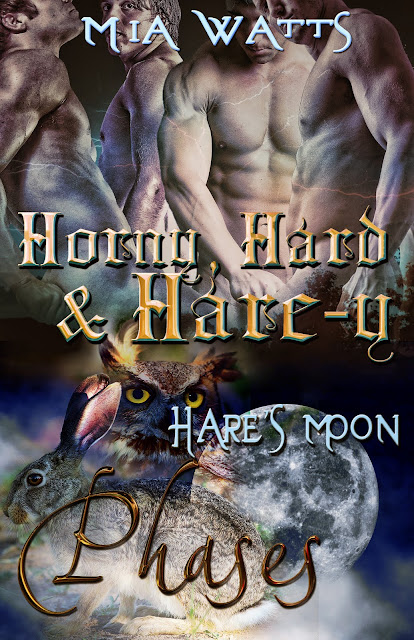 Blurb:
It's time for the annual race, and tortoise shifter, Duncan, is finally going to catch some tail—hare shifter tail, otherwise known as Charlie. With Gibbs, their owl shifter friend, keeping an eye out overhead, they're off and running. But Charlie is as spontaneously careless as the fairytale hare and finds himself caught by local DNR officer, Ben.
The full moon is rising, and if Charlie stays collared through the Hare Moon, he'll remain an animal forever. It's up to Duncan and Gibbs to free him before time is up. But in telling their secret, will they lose Ben forever? It's a foursome waiting to happen, where Ben reconnects with a mysterious lover, and the tortoise finally catches his hare.


Charlie Cuelho glanced over his furry brown shoulder. His ears twitched, ruffling a little in the breeze as his constantly moving nose tried to find Duncan’s scent on the wind. Charlie had time, lots of time, so he stopped to run a soft paw behind his long ear and down his nose. He practically shivered at how awesome that felt, so he repeated the motion.
“You’re going to lose again.” A great horned owl settled onto a nearby branch.
“I’m fine, Gibbs. He’s nowhere in sight,” Charlie disregarded. Besides, having the tortoise in his sites as he won the race was exactly what he wanted. He just didn’t want to push it too close. The fact that he’d be able to laud the achievement over Duncan again and again, didn’t hurt either. There was nothing sexier than a pissed off tortoise shifter, who owed you a debt.
Since Charlie had yet to decide what that debt would be, it would only make the moment sweeter. Definitely something Duncan didn’t want to do, like kiss him whenever Charlie snapped his fingers. For an entire month. Yeah, that would be awesome.
“That’s what you said last time, and he won. You two are a cliché,” Gibson complained, tearing Charlie away from his thoughts.
“Fuck you,” Charlie barked.
He stood up on his hind legs, trying to make his exclamation sound more impressive. Which was difficult, considering he was a hare and too damn fluffy to be imposing.
“You mean, fuck like a bunny?” Gibbs made a sound like a sniff. Which wasn’t possible, technically, since he didn’t have a nose—in owl form. “I shouldn’t be warning you, but there’s a trap ahead.”
“I’ll jump it.” A movement caught Charlie’s eye, and the tell-tale scent of tortoise reached his sensitive, ever moving nose. “You know, most owls sleep in the daytime. You don’t make a very convincing shape shifter if you can’t keep the same habits.” He’d waited long enough. Duncan’s head poked from behind a bush, stretching for a better look. “Gotta go!” Charlie told the owl.
“Wait!” Gibbs called.
Charlie didn’t wait, he wouldn’t. It was just a ploy to get him to slow down enough so that the tortoise would win the race, a-damn-gain. Every year it was the same thing, laundry chores and dishes for six weeks. If Duncan had ever made him pay up creatively, Charlie might have lost on purpose. Stinky laundry and dishes weren’t creative.
Bathing Duncan for six weeks—with my tongue—now that would be hot.
Charlie raced forward, leaping over leaves and branches. His hips twisted in mid-air, knocking his long back paws together like he was clicking his heels, before they came down, dug in and pushed him off even faster.
No way was Duncan going to win another race. Not this time. No fucking way. He glanced back as he made another leap. Exultant that he didn’t see Duncan anywhere near him, he bounded happily onward. Twigs popped under his feet. Leaves rattled this way and that, with each successive jump forward. He had this race in the ba—.
His back left paw extended. Momentum carried him to a lurching stop and Charlie scrambled uncomprehendingly, when his left paw remained immobile, no matter how he shook it.
Overhead, Gibbs circled, screeching alarm. He’d be saying “I told you so”, unless the hunter was nearby to hear him.
Charlie’s heart hammered in rapid staccato beats. His keen eyes caught the flicker of movement even before he heard the crunch of boots. Charlie froze instinctively. He huddled making himself as small as possible, even though he knew it was already too late. He’d been seen, and trapped, just like Gibbs had warned.
Fuck!
“It’s okay, little guy. No one’s gonna hurt you,” the gentle voice of a man reached him. It sounded hypnotic and soothing. A voice like that could make a guy forget that he’d just been snared, and might end up as somebody’s stew meat.
Wouldn’t this dude be surprised when he tried to skin him and found a naked man instead? Charlie almost smirked. Except he couldn’t, because he was busy freaking out at the moment.

This is the second book I did for a five person, year long anthology. My first book, Unchaste, released in March. I loved this project! We had a very few rules: Word count, menage, shape shifters coinciding with the moon on the month of our release, and a happily ever after for everyone. Some of us wrote m/m, but there are several m/f books too. Check us out at ResplendencePublishing.com
Magically appeared by Mia Watts at 12:00 AM

Thanks, Molly. :) Here's to laughter and love all the way through.

Another addition to the wish list. What a funny twist on the tortoise and the hare! Congrats!

Thank you, Jen. :) I had a lot of fun writing that scene in particular. Getting all their mannerisms down and making sure that they stood out from each other wasn't so easy. Hope you like it!

That's some title, girlie! lol Dayum and I bet it lives up to its name too. lol