I'm very excited to be guest blogging today. Thank you Three Wicked Writers - Plus Two - for hosting me.

Like most authors, I love words, and I like to analyze how we use them. For instance, in honor of this lovely blog, I'll examine the word 'wicked.' It invokes so many different concepts. Growing up, our parents, teachers, and spiritual leaders warned us about the big, wicked world, employing fear to insure our caution, and therefore, our safety.

And who could forget the wicked witches in The Wizard of Oz? When we were young, my sister and I secretly planned to be just like them when we were older, and we'd practice hexing the mean neighbor boys. I wonder if they ever did lose their teeth and go cross-eyed?

In my new release, Chase and Seduction, I use the word five times, which is often for a 50,000 word book.
He winked at her, and said in a low voice, “Later.” The look in his eyes was utterly wicked, and she turned and scampered down the stairs. Her heart thudded, and her face felt hot. Oh, God, she knew exactly what he meant by “later.”
And, weak woman that she was, she shook with lust. God, how she wanted this man. He was pure temptation, and her hands itched to grab his thighs and give him a wicked grinding in return.
As if he read her mind, he released her finger and bent his head to her breast, nibbling at her hard peak, and even through layers of clothes, it sent wicked flashes of lust straight to her core. (I had to clean this one up a little to keep it R rated)
“I’ll be right back.” Her smile grew wicked, and he would keep that picture of her in his brain always. She opened a dresser drawer and pulled out a silk scarf. Oh, yeah, two of them. “What are you up to, Reno?” His voice rumbled low and needy.
Nervous excitement shook her voice when she asked, “Are you sure?” He pulled back from her breasts and grinned at her. “I’m sure, you’re not, huh?” “I don’t know…” He laughed and picked her up in his arms and carried her out of the pool, then his lips curled in a wicked grin. “Trust me.”
Uh huh. Nothing spells out 'warning!' like a man grinning wickedly and saying, "trust me." True?
And, of course, I've chosen a wicked, wicked excerpt for you today, which appears just after this wicked book blurb: Country music superstar/actor Chase Tanner has yet to be denied anything–and he’s never wanted anything or anyone more than gorgeous screenplay writer Reno Linden. So when the film they are working on is finally finished, Chase decides to turn up the volume on seducing Reno.
Reno Linden lived a quiet, rural life until she was thrust into the Hollywood scene when her book was adapted to film. Chase Tanner is larger than life, sinfully sexy and hell-bent on getting her into bed. Skittish after a failed wedding engagement, Reno risks the plunge into Chase’s arms, and is surprised that her good girl self can keep up with bad boy Chase.
Though Chase returns to his cowboy roots often, and Reno cherishes the time spent with him on his ranch, the two find their careers pulling them in different directions. Will their attraction survive the glitz and stress of fame? 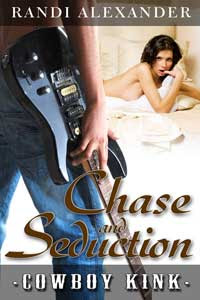 EXCERPT: Over 18 only please.
Chase laid her on the bed and started the striptease he’d perfected over the years. He smoothly pulled off his boots and socks, stuck them in a corner. Then he took off his hat, pulled off his tank top with one hand, and set his hat back on his head.
Reno turned onto her side, braced her head up on her arm, and smiled. “Do you leave that on?” She pointed to his hat.
He grinned. “For a while yet.”
“Mmm.” She practically purred. Like a kitten.
She’d be purring a hell of a lot louder when he got his face in her pussy. A flaming jolt of lust struck his belly, and his breath left him in a huff. Goddamn, he wanted into her curly patch of hair and soft, juicy lips. His erection jerked again, and he smiled and unbuttoned his jeans. Slowly. Watching her greedy eyes follow his moves.
When the last button of his fly popped open, he turned his back to her, flexing his muscles, just in case she wasn’t completely turned on yet. Then he slowly tugged his jeans down over his ass, leaving his black low-rise underwear in place.
“Chase, back up here, stud, so I can grab a piece of that.”
He looked over his shoulder at her. “You’re a naughty girl, aren’t you.”
Her voice whispered, “I can be a little naughty.”
His whole body shook. Shit, she was inexperienced, but she’d totally opened herself to him. How the hell did he get so lucky? Kicking his jeans off, he turned to face her, his chest bulked up, his arms flexed, and his cock painfully pressing his underwear nearly to the breaking point.
Reno sucked in a breath, and her eyes opened wide. She slithered off the bed, stood stock-still, and unzipped the back of her dress. Then she shimmied to ease it down her body. A red push-up bra, see-through red underwear, those fuck-me-heels. Damn, he was going to come without even being touched.
She stepped over the red pool of her dress and sashayed toward him, licking her painted lips, the glint in her eyes dangerous.
Chase held his hands out to her, she put her palms against his, then—knelt. His body jerked, nearly poking her in the eye with his shaft. “Reno.”
“You’re going to like this, cowboy, I promise.”

To celebrate the release of Chase and Seduction, I'm giving away, to one lucky *commenter, an e-copy of my novella Her Cowboy Stud. Just leave a comment either today or tomorrow we'll choose a winner tomorrow night. *Commenter must be 18 years of age or older to win. 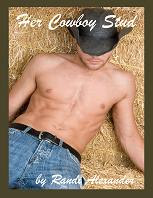 I'm also giving away a cowgirl hat to one subscriber to my newsletter. For more details, and to sign up for this contest, please go to my website, RandiAlexander.com And while you're there, you can read the first chapter of Chase and Seduction.
Good luck, and thank you!
Randi
RandiAlexander.com
WildAndWickedCowboysBlog
Chase and Seduction available at The Wild Rose Press Wilder Roses
Magically appeared by Regina Carlysle at 12:22 PM

Hi Randi! Glad you made it over here. These writers over here are totally wicked.

Congratulations on the release again.

Also, people read Chase and Seduction. I reviewed it and it was a powerful, wonderful book. Loved it and so will you

Hi Randi!
Thanks for the wicked excerpt:) The new book sounds fantastic!

Wicked! I haven't used that term to express excitement in a long time.

Hope the tour is introducing lots of new readers to your work. I alread have a copy of Her Cowboy Stud so don't enter me in the contest.

Hey, Harlie - thanks for the congrats - and for the great endorsement of Chase and Seduction. I'm glad you enjoyed it!

He Yadkny, I had to go with the wicked theme. It was just too enticing to pass up. Glad you liked the excerpt!

Wicked awesome, Jen! Yeah, I used to say that, too. Thanks for dropping by today, I appreciate your following my blog tour!

Another great excerpt! Thanks for all the wicked stuff! *g*

Hi Claudia, isn't it fun to start out your day with a wicked excerpt? I haven't even had coffee yet, and I'm all gooey inside reading it. Thanks for following my blog tour!

Hi Randi,
i just wanted to tell you and everyone to have a happy 4th of July. i love Her Cowboy Stud. please don't put me in for that as i already won. i can't wait to read Chanse and Seduction.
Again have a great 4th everyone.

Hey, Tammy, thanks for following my blog tour. Happy Independence Day to you, too. Have a great summer!

What an awesome except to post! Just wanted to say congrats again and thanks for ALL the good stories! Read them all and look forward to more! I'm passing th word around. Have a happy 4th. No need to enter me in the contest.

Thank you, Eileen, I appreciate your following my blog tour! Have a great 4th of July. Glad you enjoyed the wicked excerpt!

Hey Randi! Welcome to the blog! Happy release, may you make lots and lots of fans.