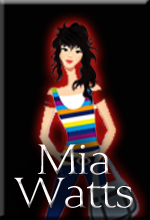 Thank you, George Orwell, for the reference that never fails to apply. I wonder if you knew how right you'd be--even if the year wasn't quite on target?

I don't know if you've seen, but several smart phones have running background software that tracks everything you do on your phone. Every Google search, every text, logged and sent to your carrier. What they do with it is anyone's guess. Perhaps they're simply chuckling and loading them to DamnYouAutocorrect. One never knows.

If that's the case, enjoy background peepers. You'll have texts from me to another friend discussing baby Jesus night vision and another with my daughter about stabbing people in the head with bullets. It's an exciting life I lead.

That our phones are following and logging our every move is a bit disturbing, isn't it? And yet we've all adjusted to video cams on our stop lights and in stores. While we were angered to learn that some dressing rooms have cameras trained on our bodies, we understood the necessity. Heck, I once made a point of glaring at every broken ceiling tile in the Target store, when I was trying on pregnancy clothes some eleven years ago. Much to my annoyance, I was followed around the store by security for the rest of my trip. Sigh. Hope you had a good look at my naked nine month belly.

But what we don't expect? What really unnerves me is the badgering. I can almost forget that I'm being watched... until, like an electric prod to cattle, the bastards throw me a reminder. It sneaks up on you. It attacks in the unlikeliest of locations. Dundundun-duuuuhhhhhhh! 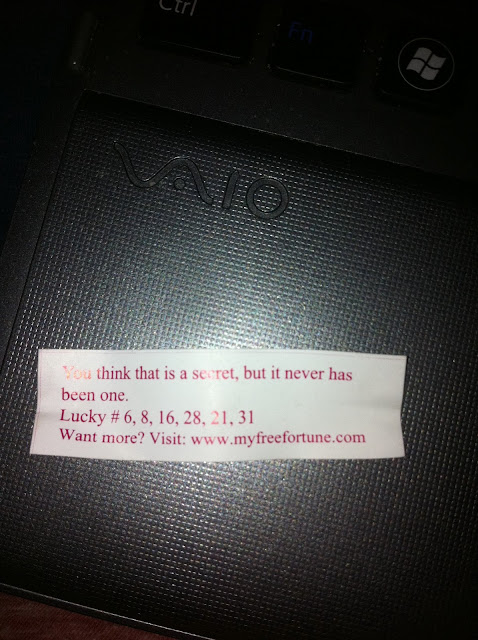 I'm not sure if I should thank Jin Yuan's Chinese take-out are start looking over my shoulder. Who the f*ck puts this in a fortune cookie?! And of the three cookies we got, TWO OF THEM were this message. Now, I realize that paranoia is unflattering, but I'm pretty sure someone is trying to warn me.

I know what it is! The government has been monitoring my texts and phone tweets to know that I'm researching and writing a book on Navy SEALs! Big Brother is not only watching, but the secret organization of taunters are letting me know that 1984 has become a reality!

I smell a conspiracy. I'll not be hushed! Next time, fortune cookie makers, the camera will be turned on you. Thank you, ever so, for the giant freak out. Pardon me, while I go draw my blinds.

~Mia
Magically appeared by Mia Watts at 7:39 AM

Oh my lord! Are you kidding me? Remind me to avoid fortune cookies. We are all freaked out enough! Through technology and interferance from God-knows-who, we have no real privacy anymore. It's scary.

OMG! That is so funny and more than a little scary. Years ago my BIL was one of the pilots for Air Force One. I am sure that our phone lines were tapped! My husband says I am just paranoid. If he was an Air Force One pilot today, I would have to fear my cell phone too!

@Regina, Normally I get the fun little Engrish fortune cookies. I love those. Less often I'll get the Mom-tone lecture type fortunes. This is definitely the first time I've had a freak warning and have been afraid of the cookie. LOL

@Anny,
I read 1984 in 1991 the first time. I loved it, but it was definitely thought provoking. What I find disturbing is just how much of our privacy we've lost without actually consenting to its loss.

@Jen B, It's just crazy! I figure I'm on their watch list several times over by now. My dad was a pilot and the government sent out people to question all the family and distant friends. They recorded all the info they gathered. Then mom went and bought a "How to poison someone" and "common household poisons" books that were on the library registry for government watch. Between the two of them and my own research into various departments of the government, I think I'm sunk.

So maybe the fortune speaks truthfully...

The phone thing bothers me the most. I know that if there is a zombie apocalypse, I will leave my phone behind. I don't need the government tracking down my ragtag band of survivors and marking us for extermination.

@Jennifer I don't think you need to worry about that so much. Your locator for twitter says you are somewhere in the middle of Lake Michigan. I've been to your house. I don't remember any long distance swims.