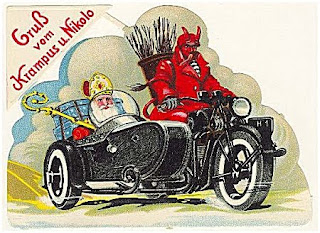 It's that time of year! The tree is up. The hot buttered rum is made. I'm even going to make wassail. As soon as I finish this article I'm baking gingerbread men. The Christmas music is on, and I'm listening to that perennial favorite, A Charlie Brown Christmas. I'm a firm believer in being naughty for Christmas. And forget Santa. He's a wuss.

You've never heard of Krampus? You have been denied a wonderful holiday tradition! Krampus is the dark counterpart to Saint Nicholas. Whilst Saint Nick gives presents to the good children, he sics Krampus on the naughty ones. Krampus goes by many names around the world including Knecht Ruprecht, Certa, Perchten, Black Peter, Schmutzli, Pelznickel, Klaubauf, and (of course) Krampus. He's most often portrayed as a devil-like creature with reddish skin, cloven hooves, and a very long tongue hanging out of his mouth. Quite fearsome! Krampus swats naughty children with switches and chains before dragging them to the depths of Hell.

The night of celebration of Krampus' existence is reminiscent of Mardi Gras – lots of dressing up in costumes, carrying torches, and drunken revelry. Sure beats leaving cookies and milk for Santa on Christmas Eve!

So you want to treat yourself and your loved ones to some naughty gifts for Christmas (or Krampusnacht, the day before Saint Nick's Day)? Buy some sex toys, head for the nearest hot tub, and bring along some smutty literature. 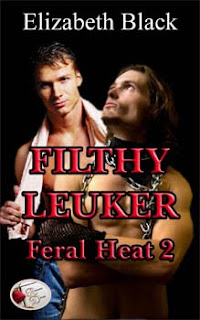 Have you read my novella Feral Heat, which is about the lives and antics of Sam Hightower and Grant Newsome, two bisexual werewolves? Those two work as lighting technicians for stage plays. That book has always been my best seller. Since many people have written to me telling me how much they like Sam and Grant I've decided to write more stories that include those two characters. The first story appears in the book Explicit Encounters published by Romance Divine. It's called Fluff The Master, and it's a FREE READ! Yes, you read that right. FREE! So pick up your copy today. You may find it at AllRomanceeBooks. You may also e-mail me at trishcwilson AT comcast DOT net and I will give you a PDF copy of the book.

Here's my Feral Heat page on my web site. It has everything you need: buy links, excerpt, blurb, reviews, and cover.

The second story is called Filthy Leuker, and it released yesterday. Look for it at AllRomanceEbooks, Barnes and Noble Nook, Amazon Kindle, Kobo, and other locations. Filthy Leuker continues the story of Sam Hightower and Grant Newsome, my bisexual werewolves from my novella Feral Heat. You may also find Sam and Grant in the free read Fluff The Master, published by Romance Divine in its Explicit Encounters anthology.

Here are a blurb and an excerpt from Filthy Leuker to whet your appetite. Treat yourself to some fantastic Christmas gifts by getting Feral Heat, Fluff The Master, and Filthy Leuker at the same time! And may Krampus look down with favor upon you.

"I don't think we'll be getting much rest tonight. I'm feeling adventurous!" Charlotte dipped her finger in her Tuaca and rubbed it around her mouth, pursing her lips with the promise of much more. She pulled a pair of dice out of her back pocket of her jeans and rolled them in her palm. "What do you say we play with my Sex Dice?"

"What are Sex Dice?" Luke looked so open and naïve Sam wanted to hug him.

"He's adorable," Charlotte brushed her fingers against Luke's arm, making Luke double-take at her bold gesture. A pang of jealousy washed over Sam, but he immediately shoved the feeling away. They'd share each other's bodies soon enough. Charlotte continued: "Sex Dice are a game. We shake the dice and do whatever they tell us to do. One die says what to do and the other die says to whom to do it."

Luke reached for the dice in Charlotte's hand but Lina slapped him away. She likes slapping. I could get into a little swat. The pain would do me good.

"No!” Lina commanded. “I'd rather see your reaction the moment you have to remove your shirt or French kiss the person to your right."

"Good thing we're bi or that could be awkward." Mirth filled Grant's voice.

"Or enticing," Charlotte nibbled brie from an apple slice. Melting cheese dripped from the corner of her mouth, and the tip of her tongue snatched it up before it could get away, making Sam's cock twitched with delight. "Have you ever seen two straight women kiss? It's very exciting. All the giggling and petting. They love it. They just don't admit it."

"Enough talk! Let's play. Everyone on the floor in a circle." Sam took the dice from Charlotte as the five of them sat on the floor with Sam against the couch and to his right Grant, then Lina, Luke, and Charlotte.

"I'll go first," He took a long swallow of his Tuaca and tossed the dice on the rug.
Magically appeared by Regina Carlysle at 9:47 AM