For those of you who don't know, I have a another identity. My naughty side, Madison Scott has a confession to make.


Yesterday was my first time. Yep, you read that right everyone, until yesterday I was an erotic romance virgin. Well…let me rephrase, I’d dabbled before. Engaged in a little foreplay that I never shared with anyone else but soon, that wasn’t enough. I wanted more. I pushed aside my desires for a while but they were never far from my mind. Then, Ty started to speak to me. He wanted his story. He needed the perfect woman but the thing about Ty is, he likes it really HOT. I couldn’t deny myself any longer. I’d found the perfect guy, and the perfect woman followed right behind. It was time for me to go out on that first date. I pushed my virginal fears aside and set out to tell Ty’s and Maggie’s story. After I finished, I’d had a blast but I still wasn’t satisfied. I knew the only way I would be satisfied was to share Ty and Maggie’s story with the world. I was scared but figured I’d gone this far, might as well take that next step. Imagine my surprise when I got that second date, I sold to Liquid Silver Books. After that, yeah, I was satisfied but there was still that little part of me that was scared to go all the way. I mean, would everyone else enjoy themselves as much as I did? I wasn’t sure but finally, yesterday, I went all the way. I watched with anticipation as my first erotic romance went up for sale. And guess what? It didn’t even hurt. It felt damn good as a matter of fact. So good that I might have to do it again. Ty has two brothers who are just as naughty as he is and I have a feeling, I’ll enjoy myself just as much with Ethan and Shane, as I did Ty.

Here’s a little taste….Maggie is about to have her first time too. She isn’t a virgin but for the first time she’s letting all her inhibitions go. She’s giving herself over to Ty and the satisfaction she knows he will give her. 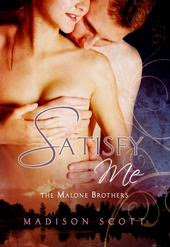 Blurb:
Tyson Malone is being stalked by a ghost. Between bouts of calling him Sugar Lips and Hot Cakes, the apparition makes it her goal to get Ty together with his sexy neighbor, Maggie Jacobson. Unfortunately, for her, Ty doesn’t do the relationship thing. He does sex with a no relationship clause. One look at Maggie is all it takes to know she’s a relationship kind of woman.

Maggie is tired of living her life the way others dictate. When her mom leaves her a journal left behind by a grandmother she never met, Maggie is inspired. This brave woman lived her life by her own set of rules and Maggie is ready to do the same. After moving to a new town, she meets Ty, a man who inspires her in a whole new, very sexual way.

Taking control for the first time in her life, Maggie propositions him with a no strings affair. Soon they begin a journey to sexual satisfaction and bringing her fantasies to life.
KINKS: outdoor sex, masturbation/voyeurism, food play, light bondage, dirty talk

A pushy ghost and a gorgeous redhead--a man doesn’t stand a chance!

Excerpt:
A knock at the door jarred her from her thoughts. “Come in,” Maggie called out while she finished slipping into a pair of tennis shoes. No one else would be at her house at six AM but Tyson. A click sounded followed by a creak. “Hey, you.”
His brow creased. “Why didn’t you make sure it was me before yelling to come in? Better yet, why isn’t the door locked?”
“Pfft. This is Last Chance. Half the people in this town probably leave their doors unlocked.”
“Just because they’re stupid doesn’t mean you should be. You’re a woman living alone. Lock your doors.”
His order should have angered her but for some reason it made her heart do a funny little flutter instead. He worried about her and dumb as it was, that made her feel good. Maggie stood up. “I usually do leave it locked. I knew you’d be coming over so I unlocked it a few minutes ago.”
“Next time wait until I get here. Anyone could have been at the door.”
Maggie shook her head. Men! Always had to be macho. “What are we doing?” She knew he planned to take her camping but other than that he hadn’t given her many clues about their day. After she’d told him some of her fantasies he told her to be ready this morning for a trip. Somehow sex would be tied in. She just wasn’t sure how.
“The river.” He didn’t elaborate any further. His voice turned husky as his chocolate eyes raked her up and down. Goosebumps pebbled on her skin following the trail of his gaze. “I tasted you all night, Maggie. The scent of your arousal clung to my body damn near giving me a wet dream when I thought about what it felt like inside your slippery walls.”
Wetness seeped from the folds of her sex soaking her panties. Tyson wrapped his arms around her, surrounding her in his warmth.
“Did you think of me when you were all tucked into bed, baby?”
Had she ever. “Yes.” His hands squeezed the round globes of her ass. “Oh!”
“Did you do more than just think about me?”
How did he know? Come on, Mags. Tell him. Don’t get cold feet now. “Yes.”
“What did you do?”
“First I--”
“No, Maggie, show me. Don’t tell me.”
Her pulse pounded. Her core throbbed with the need to come. For Ty. To show him she could be wild, untamed, purely sexual. Maggie kicked her shoes from her feet and dropped her shorts and panties. Her limbs trembled in a mix of anticipation and fear.
“Look at that pretty pussy. Did you touch yourself, Maggie? Did you sink your fingers into your cunt?”
“I pretended it was you. I wanted it to be you.”
“It will be me but not right now. I want to see you push your delicate fingers into your hungry little kitty cat. Can you do that for me, baby?”
She never would have thought she could do something like this but looking at Tyson she knew she could.

****************UPDATE************
There was an error in production of Satisfy Me. There are extra characters, @ and # littered throughout the book. This is being fixed and the new copy will be on Liquid Silver Books Website this evening. For those who might have already bought it, they'll send you a new download link this evening as well.

I can't remember if you told me or not, and I apologize if you did. My brain is mush.

This is awesome Kelley. I'm going to have to go out now and get it. :)

It's always a little intimidating doing something new and you've done a great job with this. Kudos.

I love this excerpt! And that's a gorgeous cover, Kelley! Yep, gonna go buy it now. :)

Thanks everyone!! I appreciate it.

You are so smart to have broken from your usual thing and tried something new. You surprise yourself.